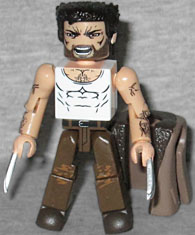 bullets, Wolverine cannot remember large stretches of his life due to the resultant damage to his frontal lobe.

Not any more! Thanks to Days of Future Past's time-travel shenaniganry, none of that ever happened now. Wolverine #49 comes from the end of the movie, when he's fighting not the Silver Samurai and an entire hedge's worth of ninjas. He wears the same jacket as Yukon Wolverine, but muddy brown pants and a white tank top. The set also includes bare arms for a "final battle" look. The great thing about Minimates is, since all the Wolverines have different expressions, you can swap heads to make any of the figures display any emotion you want. 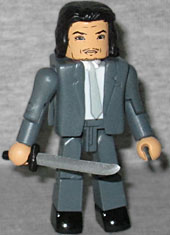 The son of a wealthy businessman, Shingen Yashida is now a vicious crime boss, controlling a large amount of criminal activity in the Tokyo area. His daughter Mariko is largely ignorant of his crimes.

Look, it's a guy in a suit! Haven't seen that before! Shingen's is grey, with a lighter necktie. Other than that, he's an Asian man in a business suit, which means we're one "short hair" piece swap away from having a Toyo Harada figure. The set includes Yashida's ancestral sword, though that just makes us regret that this figure sees him in a suit, and not after he went crazy and started wearing samurai armor. Though where would they ever find something like that?