In all the Thundercats Classic reviews so far, we've pointed out how poorly written the biography paragraphs on the back are. In honor of today's Mumm-Ra review, we did what Mattel couldn't be arsed to do: consult a professional copy editor. 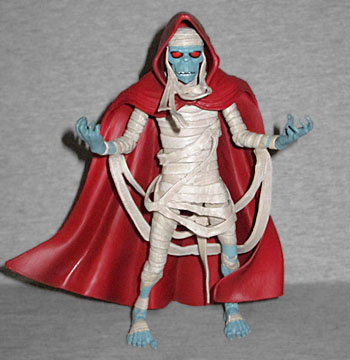 Here's what she had to say:

Someone thinks he's writing a student essay. His professor once took a red pen to his paper and wrote: "Better transitions! You need words such as 'however' and phrases such as 'by contrast.' How else will anyone know that you're college-educated?"

The writer never met a comma he didn't like. It's not just the Oxford comma argument. Any sentence with fewer than three commas is a failure.

Here's what he meant to say:

The mysterious Mumm-Ra hides behind layers of secrecy. Intelligent and cunning, he shrouds his feeble body in robes as he schemes from deep within the Black Pyramid in the darkest corner of Third Earth. By day, he watches the Thundercats for signs of weakness through his bubbling cauldron. By night, he regains his strength in his sarcophagus. Granted immortality by the four Ancient Spirits of Evil, Mumm-Ra controls the Mutants in his quest to defeat the Thundercats.

Booyakasha! That's how you write a bio!

This entry was posted in addendums, Mattel and tagged Thundercats. Bookmark the permalink.