Obsessed with finding his parents' killer, Bruce Wayne pursued his own investigation, with the help of his butler Alfred Pennyworth and street thief Selina Kyle, the only other witness to the crime. But after a falling out with Bruce, Selina now works for newest crime boss of Gotham City, Oswald Cobblepot, a.k.a. the Penguin. 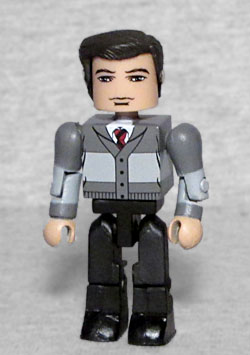 Box Set 2 brings our first mass market Bruce Wayne (based on Gotham, at least - there was a grown-up version in that old Batcave C3 set). While the one previously available in the SDCC two-pack was wearing a heavy coat, this version is wearing his two-tone grey Brooks Brothers shawl cardigan. Why is this poor child always so cold? Is Wayne Manor heated at all by anything other than large, ostentatious fireplaces? Does Bruce have an iron deficiency? Alfred needs to feed this boy some damn red meat or spinach before he gets pale and starts falling asleep in the middle of the day. The figure's expression is still appropriately emotionless, but it's a different pattern than the exclusive's was.

The closest thing Bruce has to a friend is Selina Kyle, a girl from Gotham's slums who tried to scam him by claiming she saw who killed his parents, 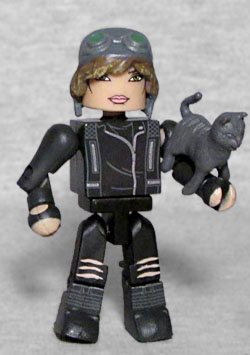 then robbing his mansion when she was invited over. Hey, still a better playmate than Tommy Elliot, right? Like Bruce, Selina is made using the child-sized arms and legs, in an effort to make her appear younger than the rest of the Minimates. She's played in the show by Camren Bicondova, who appears to be the result of some sort of cloning experiment conducted with Michelle Pfeiffer's DNA (the same way Cameron Monaghan is a reconstituted Jack Nicholson). She's got a new cap piece, with a little bit of her curly hair poking out from beneath her grey hood thing, and goggles sculpted on the top. She's got fancy tampographs to create her leather jacket, the rips in her jeans, and the fronts of her boots. Her hands are painted to suggest her fingerless gloves. The set includes a pet cat that can rest on her arm: it's not the one that came with Peter Venkman, because it has fur; rather, it's a repaint of Jonesy from the Alien box set. 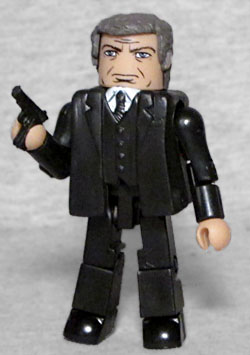 The weakest figure in Box Set 2 is clearly Alfred Pennyworth - it's a butler's job to be unobtrusive, so of course he's just wearing a dark black suit. Minimates have several suit jacket chest caps in their parts library, and Alfred's wearing the one that includes the vest, because he's a fancy man. He was often seen with the jacket off, so it's too bad the set doesn't include an alternate vest for him. The likeness of Sean Pertwee is okay, but you could just as easily tell us this was a future version of Ben McKenzie and we'd believe you. Gotham Alfred gets the same military backstory the comics have adopted in modern times, so if you want to give him the gun this set includes, that would make perfect sense.

The final figure in this four-pack is Oswald Cobblepot, 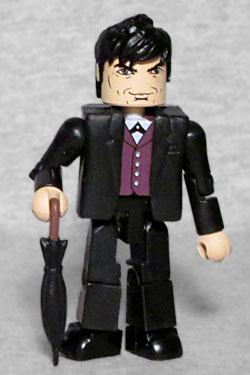 the only real bad guy in the bunch - yes, Selina may hang out with the wrong crowd, but she's not a villain by any stretch of the imagination. Oswald was originally just a low-level lackey for Fish Mooney, an underboss in the Falcone Crime Family. His ambition eventually led to him taking over the entire underworld, and eventually becoming mayor of Gotham (because that's what Penguins always do). The toy has a great likeness of Robin Lord Taylor, with a sort of mean smile, and he's got that silly haircut that manages to both stand straight up off his head and fall into his eyes. He wears a different jacket than Alfred did, so his purple vest is just a painted element on the torso block. Since his first job was just carrying Fish Mooney's umbrella, the set includes one for him - the same mold John carried in one of the Peter Pan box sets.

The Gotham Series 2 Box Set may not be the most visually interesting thing ever put on a toy shelf, but with four main characters, it's a better draw than Box Set 1 was.