After the Fig Rig and the Let's Go, Mattel began an entire series 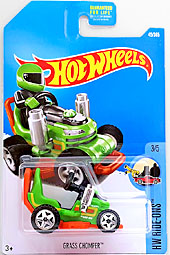 of Hot Wheels called "Ride Ons" - all cars designed for minifigures to attach in various ways. The first one I saw was the Tankanator, but since it wasn't red (my preferred color), I skipped it. Then I missed a bunch more. But the Ride Ons are back for 2017, so I'm going to try again.

Born: 2016
Birthplace: El Segundo, California
Designer: Hot Wheels
Specialty: With its powerful twin blades and supercharged engine, the Grass Chomper will mow your lawn in no time! Fun facts: if you place a quarter behind the driver's seat, you can pop a wheelie! You can also attach your Mega Blocks [sic] figure!

Oh, Mattel, you silly goose! Nobody has Mega Bloks figures! You're like McDonald's trying to sell tacos when Taco Bell already exists. 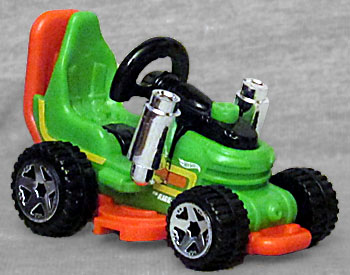 This thing is destined to seat Lego figures and nothing else. Though to be fair, I didn't guess the bit about jamming a quarter behind the seat, so that's good information! Or, it would be, but... you know what, we'll get to that eventually.

The Grass Chomper is, naturally, a riding lawn mower. When this mold was introduced last year, it was apparently the first HW mower since 1997, when they released a multi-pack based on Home Improvement, including a stupidly suped-up "Dixie Chopper." Originally available in yellow (like a Cub Cadet) and later repainted in red (which I never saw), the Grass Chomper has been redecoed for 2017 in green. So yeah, the whole "I'm only collecting red" rule is no more.

Unfortunately, the green is paired with orange - it makes for a vibrant contrast, but if they'd done yellow instead, we could have pretended this was a John Deere.

It does have some yellow trim, but not a lot. The Hot Wheels logo is tampo'ed on the front in white, as is the "Ride-Ons" name. This must be one fast mower, because the driver's seat has a multi-point harness, rather than a normal seatbelt, and there are two big, chromed exhaust pipes sticking up next to the engine. The wheels are rugged off-road treads, but a smooth raised ridge on the center means it will roll smoothly. If you flip it over and look underneath, you can see the lawnmower blades sculpted there, plus the vent where the clippings would blow out. 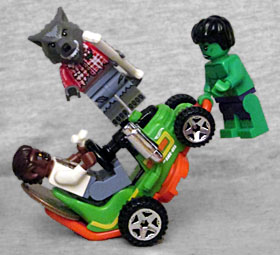 Most of the Grass Chomper is molded from plastic, which is why putting a quarter behind the seat will make it heavy enough for a wheelie. It'll also be heavy enough if you just put a minifigure in the seat, so don't feel you need a coin. Sometimes you can even get it to balance by itself, with no help at all. Beyond the obvious seat, figures can also grab the roll bar in the back, the bumper in the front, or the ridges on the sides. The exhaust pipes and the gas cap on top of the engine are sized for a Lego-figure's foot, too.

The packaging declares this is figure #3 of 5 in the Ride-Ons subline, so I'm guessing Fig Rig and Let's Go are numbers 1 and 2? I'll be keeping an eye on the Hot Wheels section to see when 4 and 5 pop up.