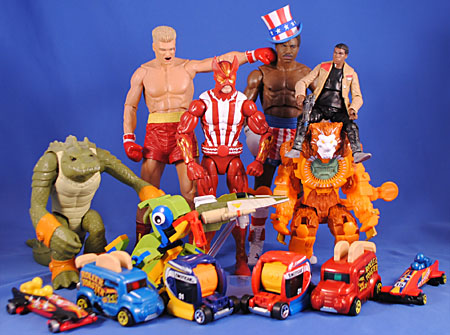 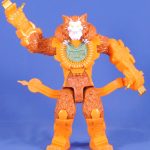 I'm not a Power Rangers fan, and only have a mild nostalgia for the original Mighty Morphin' show, but when I saw this magnificent insanity staring back at me on a peg at Walmart I knew I had to have it. It's a goddamned Cat/Clock hybrid monster. Why? I mean, no seriously, WHY??? This is just beautiful craziness and I had to have it! The figure is a pretty decent sculpt, all things considered, with balljointed shoulders and hips, and hinged knees. The paint is exceedingly minimal. Given the nature of the whole thing it's not that bad, but I would have preferred the fur on the forearms and calves be painted to match the rest of him. The card art photo of the costume reveals him to be more of a calico coloring, and while the sculpt on the watch face is good, one immediately starts to wish it was an actual digital clock, soooo... thoughts of customizing dance in my head. I do worry that this guy could be a gateway drug in to a slippery slope of goofy Power Ranger villains, but what could possibly live up to a mecha cat kaiju with a Casio watch for a torso!? 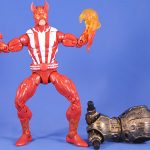 Getting my Warlock built, motherfathers!! I have no particular attachment to or interest in Sunfire, but I'm glad to have him because he turned out quite well. He's one of those rare costumes that actually seems to work just fine as paint, rather than sculpt, and the excellent head helps build the impression of more uniqueness to him than there actually is. Plus, he uses one of the super articulated Spider-Man bodies for great posing options. He also gets two little fiery bursts for his fists. Not sure if they're new or reused (Iron Fist?) but they too add some nice flavor to the figure. He comes with Warlock's torso, and man is that guy shaping up to be one of my favorite BAFs! 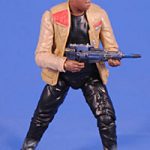 No doubt a result of the upcoming Episode 8 and near-total bellyflop of Rogue One merchandise, Walmart was clearancing out these 4" figures for $5, soooooo I went ahead and got a second Finn. Why? Not entirely sure. Just seemed like, at that price, I should have two fully articulated Finn's from Force Awakens. He's a good sculpt and has all the balljointed articulation we've come to expect from Hasbro. His sole accessory is that goofy Super Soaker blaster, but it seems like a better sculpt (and paint) than the other releases. A good figure of a fun character in a boring-as-hell costume. 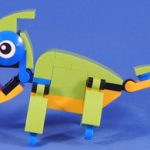 Whoa! That's awesome! Stumbled on this sucker at a Meijer and had to him. Love the colors! Love the bricks used! Love the premise! Love that he's articulated! This is a really fun build and a perfect fit for the Polybag format. This iguana with his googly eyes and a fly on his tongue would be a great thing for kids' parties or something like that. Fun to build and thanks to the use of clip-bricks, fun to play with. 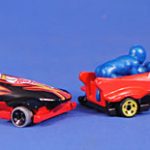 Damn you Hot Wheels, you know how to sucker me right in. I'm not especially into luge or Cool Runnings or tiny, tiny butts (I cannot lie), but it is kind of a dynamic shape, plus the plastic figures are kinda neat. This is one of those that if I saw on its own I'd probably have passed on, but since they had both colorways I got roped in and will continue to collect this thing in color they release! 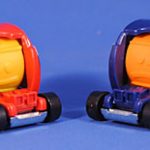 Oh man - this is just pure novel fun! It's goofy little golf cart shaped vehicle, but the "special feature" is a plastic barrel drum in the center that has 🙂 and 🙁 style happy and sad faces, and you can spin around to feature whichever you'd prefer! I will confess that I was quite surprised that there were only the two options, since the drum seems big enough for three or four, but two it is... It's also kind of a bummer that the faces aren't painted, but it'll be easy enough to hit those with a sharpie to make 'em pop more. And likewise, they can always make more/different drums with other expressions too. The red car with yellow face was first out, and then the blue with orange face is the latest; and, by gum, I'll be buying every variation they release! 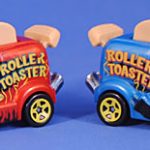 I mean, come on... it's a toaster car! I was shocked to find two different colors of it, but quite pleasantly surprised as well. The car is diecast and the toast/lever is a single piece of plastic. You push down on the lever in the back, then release, and the toast pops up. Unfortunately the gimmick isn't that great as the toast doesn't go down in to the car very far, but this still way more fun than any old dumb truck or car, or whatever. 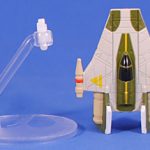 Finally got around to picking up this Rebels style A-Wing. It's pretty neat and a surprisingly nice redesign, though subtle, of the classic ship. I might even go so far as to say I prefer this smaller version to the classic one... maybe. I've never been a big fan of non-red A-Wings but I like the colors here. Not sure if it's the new pattern, the new design, or what... but it works. This is also my first purchase of the new display base for those Hot Wheels ships. It's a good, two-piece display with an arm and a base, but I still really like that first version that could also fit on your finger for easy and fun swooshing! 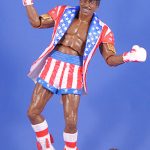 It's really cool that NECA is bringing back their Rocky figures, and this may well be the most exciting release as it's not something they (technically) did before! At first glance this appears to effectively be the same Apollo figure that they made for the first movie, but the socks and BOTH heads are all new! This figure is totally worth it just for those, but both heads are good enough I'm tempted to get two figures! The top hat fits well and is surprisingly versatile. The coat is one solid piece, so unfortunately the shoulder sections restrict the articulation a lot. These bodies are well articulated though and really well engineered (you'll notice Apollo is balancing on one foot in the photo). This is an excellent addition to the collection! 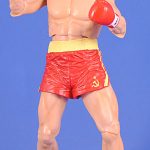 Since NECA originally released the Rocky figures I have FINALLY seen the movies (well, 1 through 3 at least [and Creed, of course, which was surprisingly great]), so I was jazzed for the opportunity to fill in the ranks of figures I'd passed on the first time. I did get the regular Ivan Drago back then but needed the "battle damaged" version now! It's neat, but is it really worth another $20-$25-ish dollars? ...honestly I'm not so sure. Really it's just the head and color of trunks that are unique. It'll be good to have him for diorama posing, and he is a great figure on his own. I just would have preferred a bit more, I don't know, noticeable blood/sweat/grime on the body or something. 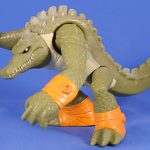 I love me crocodiles, so Leatherhead is, of course, a favorite. I particularly like the CG cartoon version since he's more Crocodile than Dundee. That show is wrapping up here shortly and Playmates is squeaking out a few final figures but offering up some novel repaints of past releases including this neat Leatherhead in a lighter shade of green than the original release. In fact, between the muted color of his skin and the orange on his wrist and ankle wraps, it's been supposed that this is Michelangelo colors! I dig that premise, and if it's accurate, then of course I want three more in the colors of the other turtles! But, as is, it's just a fun, neat repaint of a fun, neat figure.