Looks like my Mystery Minis wolf pack is now up to three.

In 1984, Topps decided to cash in on the Cabbage Patch Kids phenomenon 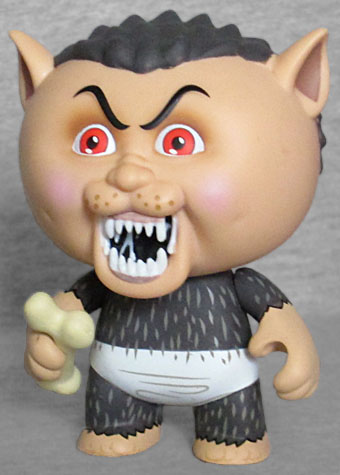 with a line of trading cards that appealed to kids' love of grossness. Like another property that came out that year, Topps found, much to their surprise, that combining several very popular things can create something very popular. The resulting Garbage Pail Kids became a fad of their own; stores couldn't keep them in stock, schools banned them, and they were licensed for all sorts of ancilliary merchandise. The original line ended in 1988, but nostalgia brought them back in the 2000s, and now Funko is releasing GPK Mystery Minis.

(Technically, "Really Big Mystery Minis" - the original plan was to have normal-sized MMs and a regular POP! version of GPK poster boy Adam Bomb, but both product categories saw size increases before release.)

The second series of blind-boxed figures includes Eerie Eric, a character from Series 3 of the cards. First released in 1986 as card #116a (#116b, of course, being "Berserk Kirk"), Eerie Eric was originally drawn by John Pound as a werewolf on the lope: 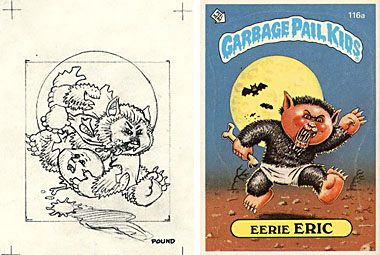 he would have had a furry face, the tattered remnants of his clothing, and would have been carrying the severed arm and head of a "plain" GPK. Apparently that was deemed too gruesome, because the final artwork by Tom Bunk had a bald-faced Eric wearing a diaper and carrying a bone. The "official" design also showed up in 2013's Brand New Series 3, where he gained the third name "Heartthrob Harry" and semed to have both Buffy and Bella swooning over him. The intended design has inspired some fun fan-art, as well, both in 2D and 3D! 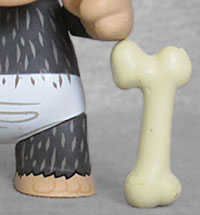 at the neck and shoulders. The arms on mine were stuck fast, so I boil-n-popped them out to trim them down a little. The fur and diaper details on the body are merely painted on, but the head is fully sculpted - even the strands of saliva in his mouth! His eyes are red, the insides of his ears are tan, and there's a rosy glow in his cheeks.

A few of the Garbage Pail Kids Really Big Mystery Minis come with accessories, and Eric is one of them: he's got his bone. It can be held in either hand, and is a slightly more yellow shade than the pure white of his Huggies.

The GPK Mystery Minis are evenly packed one per case, but the layout is random, so @funko_layout is of no use. That's great if you want a complete set, but if you only want a specific Kid, it's annoying.