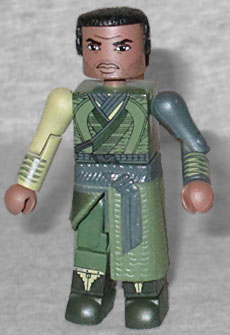 One of Doctor Strange's four villains (him, Dormammu, Nightmare, and sometimes Shuma Gorath), the movie reimagined Baron Mordo as an ally. This Minimate has a decent likeness of Chitlin Ejector, complete with worry lines on his face and some stubble, putting us one step closer to some Serenity Minimates at last! The tampograph on his chest and back is impressively complex, while his skirt is a molded piece. Art Asylum did a really nice job making the details match between the painted and sculpted areas, so good on them! He has no accessories, so if you want to give him a stick, you'll have to borrow one from a Gambit or something. The skirt does sadly keep the legs from moving, of course. 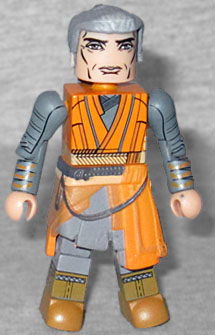 Kaecilius actually is from the comics, though not in any way memorable enough to be worth mentioning. He was one of Mordo's henchmen, and didn't even get a name in his first appearance (Strange Tales #130, 1965). Nor did he look like this, so basically they had a character, they picked an obscure name from the books, and slapped the two together. Hey, Guardians of the Galaxy did the same thing, so no complaints from us! Kaecilius's orange next to Mordo's green makes this a set with some nice contrast in it. In fact, other than The Ancient One, Kaecilius is the brightest, sunniest figure in this lineup. The parallels between paint and sculpt aren't as strong on this toy as on Mordo, but it's great that everyone gets a unique mold for their skirts, rather than just trying to repaint one style to match everybody.