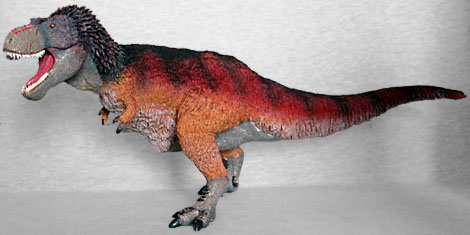 Scientific Name:
Tyrannosaurus rex
Characteristics:
Tyrannosaurus is a muscular carnivore with large jaws filled with teeth the size of bananas. It walked on two muscular legs and had relatively tiny arms with two-fingered hands. New scientific evidence suggest that its body was probably covered with feathers.
History
This infamous predator was named in 1905 and was the first tyrannosaur ever discovered. Scrappy material pertaining to this giant carnivore was found in the late 1890s, but more substantial remains were discovered during a 1902 expedition to Montana led by the American Museum of Natural History. Tyrannosaurus fossils have since been unearthed across the western North American states of Alberta, Saskatchewan, South Dakota, North Dakota, Wyoming, Colorado, Texas, New Mexico, and Utah. Several fossil specimens, including four complete skulls, two complete bodies, and other incomplete skeletons representing over 30 individuals, mean that Tyrannosaurus is one of the best understood theropod dinosaurs.

Specimens of earlier, smaller tyrannosaurs from China, Dilong and Yutyrannus, have been found with feathers preserved. This evidence suggests that Tyrannosaurus also had feathers because these species are so closely related. Tyrannosaurus even had a wishbone resembling those of modern birds. It was too large to fly, of course, so its feathers may have served another purpose, perhaps being used for colorful displays.

This entry was posted in addendums, Safari Ltd and tagged dinosaurs. Bookmark the permalink.