Shanna O'Hara is a former Olympic athlete and a licensed 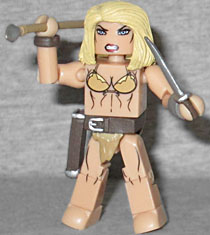 veterinarian, and she has made the Savage Land her adopted home. Her fierce hatred of firearms arose from the accidental shooting death of her mother.

This Shanna is based on Frank Cho's redesign of the character, so it could probably serve double-duty as his "original" character Jungle Girl, as well. She's blonde, and her animal-skin bikini top is painted on. She has different kinds of cuffs on both wrists, and her loincloth/belt/sheath combo is a single molded piece that fits over the waist. She's got a great angry look on her face, and is armed with both a spear and a big knife. But no guns. Like the bio said.

In the Savage Land, the skies are owned by the Reapers, giant 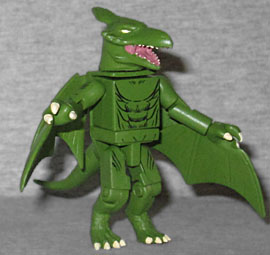 pterodactyls who resemble X-Men villain Sauron. When they attack Wolverine and Shanna, they quickly learn that the pair are not easy prey.

Wow, this isn't Sauron? I figured they were just not calling him Sauron because, you know, "Sauron." He's built like a Battle Beast, with Lizard legs, a tail that plugs into a specialized back piece, and cool new hands that have half his wings hanging off them. The head is a bit more spiky than you expect from Sauron, but this is still a good stand-in. He comes with a special display stand that's been shaved down to fit in his ultra-small foot hole.

This particular set is based on the first storyarc in Savage Wolverine, which saw Logan team up with Shanna and an inexplicably adult Amadeus Cho to escape an island in the Savage Land. Yes, there were a whole bunch of Saurons Reapers in the story. That's why the TRU Minimates released around the same time as Series 51 included a Wolverine & Reaper set, so you could army-build; but given the choice between Shanna and Wolverine (and knowing that you only need one Sauron), who would ever choose the short hairy guy over the tall blonde with the spear?