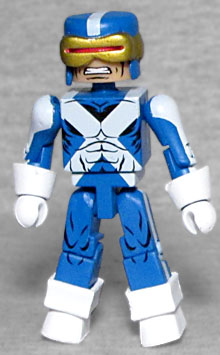 Scott "Slim" Summers was the deputy leader of the X-Men before forming X-Factor. He possesses the power of optic blasts.

There was a Cyclops in the 2009 X-Factor box set, but it was in his first team uniform, the one with a yellow X on the chest; this is his second costume, with a white X. Cyclops is generally not a very adventurous dresser, it turns out. The biggest change is that he now has stripes down the outside of his legs and over his head. This figure gets flared boots and gloves, and if you take his mask off, you'll see his red eyes. There's also an alternate '90s-style piece with his hair exposed, but he never had that with this costume; his next one, which went back to yellow, did, so maybe give that bit to the old toy? 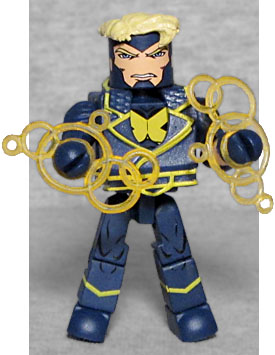 Alex Summers, Scott's brother, was a member of the X-Men before leading a new incarnation of X-Factor. He can create directional directional energy blasts.

It was nice to see Havok finally get out of his original black costume, even if this is very, very '90s. His jacket and hair are new pieces, while the sleeves and gloves are not. The jacket has yellow piping on the seams, and there's a big yellow X painted on his exposed chest block. He looks quite angry, which is true to how he was in the comic (due to the pressure of living up to Scott's example). The set includes new energy effects for him, translucent yellow circles. Bet we'll be seeing those again!

Series 78 is one of the ones that has a Build-A-Figure, so the set includes some pieces for that. The figure is Strong Guy, and the pieces are his big ol' legs.