If this is winter, the world must belong to him.

Like The Emperor's New Groove, Frozen got drastically reimagined 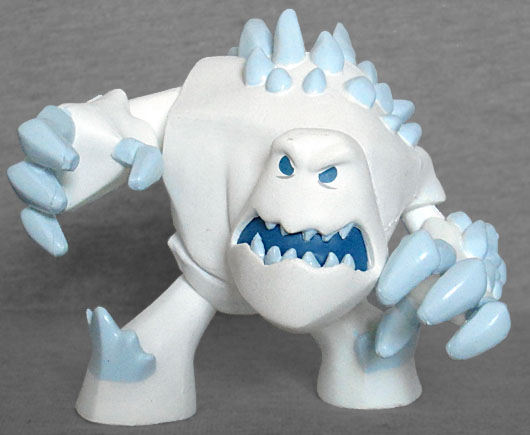 partway through production. Elsa was originally a traditional villain, until the writing of "Let it Go" made her more sympathetic, and the entire story was rejiggered to accommodate that. Way back then, her dragon would have been a polar bear (she also wore a swarm of live minks as a coat) - obviously, that was changed in the final product to a second snowlem, dubbed Marshmallow.

While tiny little Olaf was the embodiment of Elsa's happiness and innocence, 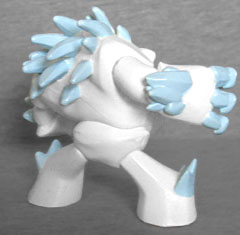 Marshmallow is her desire to be left alone: big, scary, loud, and threatening. This Mystery Mini shows him in full-on "attack" mode, with a hunched posture (that, it must be said, makes the toy want to topple over pretty easily, thanks to its far-forward center of gravity), a fearsome mouth, and dozens of icy spikes protruding from his back, forearms, and knees like Doomsday or something. Snow Doomsday. Snowday. The ice is just painted a pale blue - it would have been interesting if they'd molded the entire figure in translucent blue, then just left those bits unpainted, but that might have been too much for the budget to handle.

Marshmallow was available in a 1/24 ratio in the Frozen Mystery Minis, meaning he wasn't in every case - but being the only massive figure, 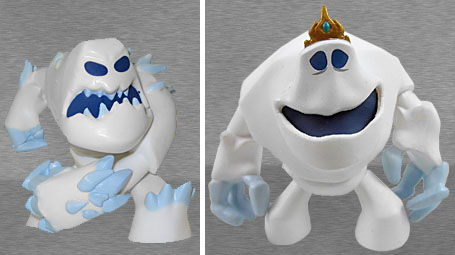 it was pretty simple to find him. There was also a 1/72 variant version that showed him happy and wearing a crown, but come on: you know the normal one is better. Marshmallow also appears in the Disney Heroes vs. Villains series, with a different, more dynamic pose, but the assembly of that figure leaves a lot more conspicuous lines on the body, so you may want to stick with the themed release.