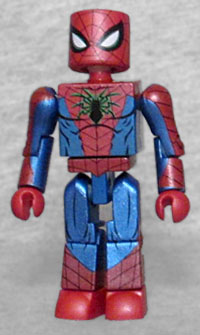 Reclaiming his body from the mind of Doctor Octopus, Peter Parker found himself the head of Parker Industries, a global tech provider, and upgraded his Spider-suit accordingly.

We've already reviewed this stupid new Spider-Man costume once, but it looks better on this Minimate than it did on the Marvel Legend. It's a shiny metallic color, making it look more like a high-tech piece of equipment than sexy spider spandex. It has the weird pointless angles Alex Ross designed for it, and the green glow around the spider-emblem. There's a web line included in the set, and an unmasked Peter Parker head. Still, this is the "boring" figure in this set. 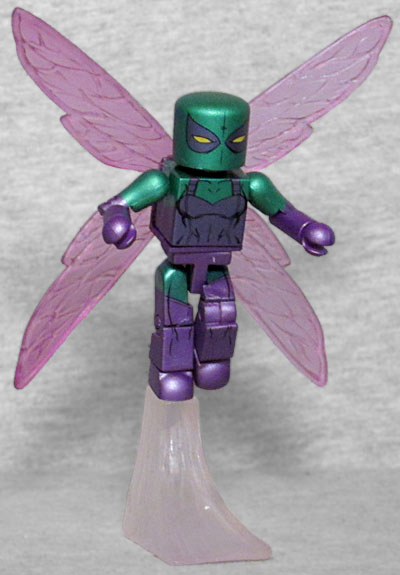 Janice Lincoln is the daughter of Tombstone, and was drawn to a life of crime. After receiving the Beetle armor from the Fixer, she became a member of the Superior Foes of Spider-Man.

Hey, it's Beetle! You know her from being a total pegwarmer! But that's a different line. She's looking pretty nice here, with a metallic sheen that matches Spider-Man. Her costume is green and purple, because of course it is. She gets a new back-piece that allows her to have four wings, two more than Wasp did. They're translucent purple, suiting the colorscheme. The figure includes a one-footed flight stand, and you can remove her mask and replace it with her black hair. Since she spends a lot of her time texting in the comic, she includes a phone. 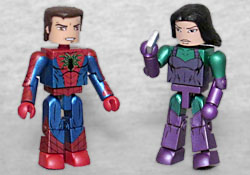