The gimmick of this year's "Power of the Primes" theme is that the Transformers can join up with various "Prime Masters" to gain new powers. When you buy a Deluxe, Voyager, or Leader Class figure, it includes a card revealing the powers granted by one combination. Just one. Out of 12. So here's a list of all the powers Moonracer can gain: 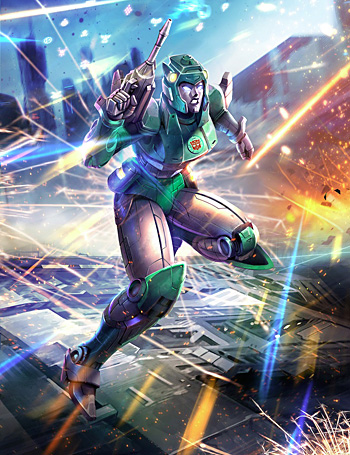 Alchemist Prime
Becomes a mass of raw protons to travel between worlds.
Amalgamous Prime
Forms booster jets and airfoils to enhance her speed.
Alpha Trion
Translates the Covenant of Primus for Cybertronian youth.
The Fallen
Obliterates the spark of any foe with a single shot.
Liege Maximo
Knows the truth behind every lie she hears.
Micronus Prime
Power-links to grant bots a sharpshooter's aim.
Nexus Prime
Grants Combiner minds a sniper's concentration.
Onyx Prime
Gains the ability to see to the edge of the universe.
Prima
Grants enemies one shot at redemption before blasting them.
Quintus Prime
Fills the metal of dead worlds with life-giving energon.
Solus Prime
Forges a blaster that shoots a near-infinite distance.
Vector Prime
Can aim her blaster down the time stream.