The Hulkbuster Armor is designed to take on the Hulk 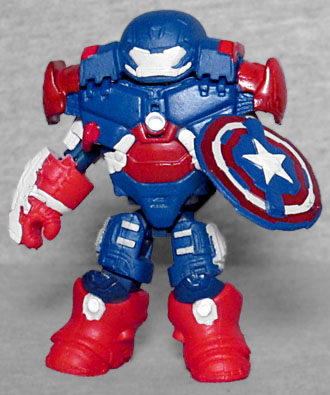 if he loses control. Captain America's Hulkbuster features a larger version of his shield.

This is a Walgreens exclusive, which means it's based on the Marvel animated series - in this case, Avengers Assemble, from a Season 3 episode when Tony gave Hulkbuster armors to everybody. Including Falcon and Hawkeye. This Minimate is just the usual Hulkbuster Minimate mold painted in blue, red and white. Which, you've gotta admit, is pretty dang cool. It's like an Iron Patriot Hulkbuster! The shield it comes with is a new mold, because the handle needed to be large enough to fit over the giant Hulkbuster glove.

Plus it's got more blue than usual, because it expands outward. The helmet lifts up to show Captain America's face, but unlike the previous Bruce Banner exclusive, you can't strip him down to reveal a plain Cap beneath; there isn't even a star printed on his chest. That's okay, we have plenty of plain Caps already.

The son of the Hydra founder Heinrich Zemo, the elderly 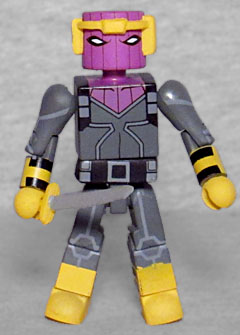 Helmut Zemo is rejuvenated when he takes his father's super-soldier serum.

Hey, neat! As we move further and further from Captain America's WWII origins, it gets harder for his villains to have any connections. The line from Papa Gluehead Zemo to Junior Meltface Zemo was starting to stretch pretty thin, so youthecizing him via magic juice is a nice move. The figure's only add-on piece is his tiara, while all the rest of the costume details are painted on. His suit looks pretty tactical, a lot like the concept art for Civil War that would have seen him wearing a purple ski mask in the Siberian scenes, but gets the bright yellow gloves and boots to add some color. He's armed with a sword, but it's made from a very soft plastic that makes it almost floppy.

The contrast of unadorned figure and extravagantly molded figure, as well as bright colors and muted colors, makes this a really appealing set.