Series 25 may be the last TRU-exclusive Minimates to be released, but they weren't the last ones I got. I didn't initially plan to get this two-pack, but as part of my TRU farewell tour, it was now or never.

Iron Man was all over Spider-Man: Homecoming, just like he was all over the poster. The Mk. 47 was basically the movies' take on the Ultimate Iron Man armor, which did get its own Minimate once upon a time (2009, specifically). To keep the suit from being overly bulky, the toy gets minimal add-ons: a thin chest cap that only comes down about nipple-high, upper arms that have the shoulder armor molded on, and hands that have red armor poking up onto the back of the arms, rather than doing full gloves. It makes the suit look really sleek! The head is just a head, no helmet, and all the other details are simply painted on. He gets a trans blue swoop stand to allow him to hover and save any boats that might need it.

There are those who don't consider Marvel Minimates 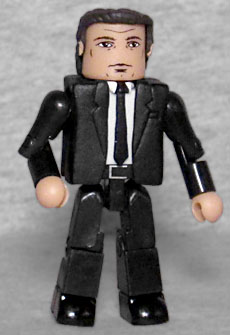 The previous Happy Hogan came to us from Iron Man 2, and that was eight years ago: a guy in a black suit is a guy in a black suit, but this figure does show an improvement over the other. The design of the face looks more like Jon Favreau than before, basically. This time his suit is the open jacket kind, but it's kind of a bummer that he doesn't have any accessories. Like, none. He spends most of the movie dealing with Peter via Skype (or whatever the Starktech equivalent is), so why no phone? How about the case he brought Spidey's suit in? A clipboard for moving day? Anything? That lack of "stuff" is honestly the main reason I was going to pass on this set. And ultimately I'm glad I got it, but only because of where it was sold, not because of its own merits.