The product of a failed Spider-Man cloning project, Kaine is an unstable villain who dons the suit of the Scarlet Spider.

Eh, he's an ex-villain. By the time he got this suit, he'd been acting heroic for a while. But still, it's wild that we've already got two Marvel Legends of this costume, isn't it? This definitely beats the last one, in terms of paint, sculpt, and accessories. In ML5, Scarlet Spider used Hasbro's tired take on the Bullseye body, while this one benefits from a newer, larger source. He's still red and black, though the specific pattern of black on his shoulders has been cheated a little to better fit with the articulation. Not that anyone is likely to notice, because, come on: it's the Scarlet Spider.

The figure's masked head is new, with a very thin, pointy chin and small, inset eyes that almost make 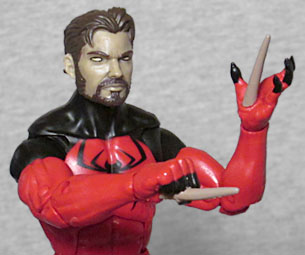 him look alien. We also get an alternate unmasked head for him, with a sickly skintone, blank eyes, and a beard - which you may be able to guess makes it a repaint of the Cosmic Spider-Man head (a perfectly logical choice since, discounting their origins as clones or in alternate universes, they're the same man).

If that weren't enough, we get alternate hands: you can give him plain fists, or you can give him hands that have his bone spike "stingers" extended from his wrists. Those really should have taken a cue from Iron Man and skipped the hinge joints: he can't flex his wrists if a bone is poking out through them!

Scarlet Spider comes with the left arm of SP//dr, this series' Build-A-Figure.

Since there was already one ML Scarlet Spider available, no one was really clamoring for another, but there's no category in which this one is not superior.