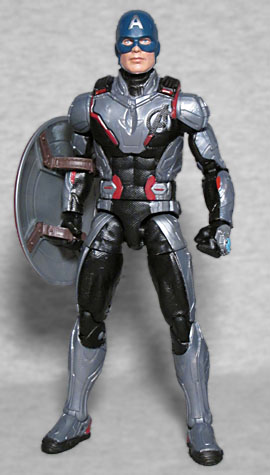 The First Avenger, Steve Rogers continues to protect the world from evil as the star-spangled hero, Captain America.

That doesn't really say anything at all about Cap's role in Endgame that's remotely different from his role in the other movies, so instead, here's a spoiler from Captain Marvel: in that movie, it's revealed that Carol Danvers' Air Force call sign was "Avenger," inspiring Nick Fury's name for his new defense initiative - a very cool touch that helps cement this newcomer's importance, putting her on equal footing (narratively) with the characters we've been seeing for years; in the comics, however, her call sign was "Cheeseburger," thus positing an alternate reality where Fury secretly moved forward with The Cheeseburger Initiative, and where Captain America is colloquially known as "the First Cheeseburger."

Cap uses the same armored body seen in today's review - the Hawkeye one, not the Black Widow one. Because the MCU hasn't gotten to Peggy Carter, Shannon Carter,

Danielle Cage, Samantha Wilson, or Lindsey Vonn yet. That certainly explains why Hawkeye's left hand is just a fist instead of something with a pose. The head is new, but new doesn't necessarily mean better. Conflicting with the art on the packaging, this is the first toy to have Steve's ears covered since Avengers 1. I know Chris Evans is apparently self-conscious about the way his ears stick out in the mask, but it always looks better with them visible than with them covered. The A on his forehead is a raised element, while the wings on the sides are sunken in. 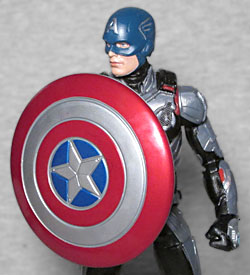 It seems Captain America will be getting his classic shield back, trading in the one he was given in Wakanda. This is the same mold from the First 10 Years set: the star on the front is flat, rather than rising to a slight point in the center, and there are no molded rivets pretending to hold the straps in place. There's also a big molding artifact on the bottom of the back, which could have been touched up. If it had been, that would have been an excuse for why he doesn't get a piece of the Warrior Thanos Build-A-Figure.

There are seven figures in this series, and eight in a case - the doubled-up figure is this Captain America, which means you'll probably be able to pick him up pretty cheap. I mean, the figures have been out for about two weeks now, and I was already able to get him below retail. Captain America had better have some really bomb-ass scenes in Endgame, because this figure isn't very interesting on its own.