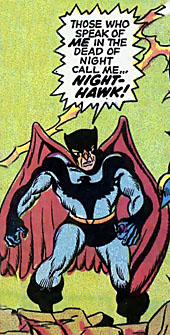 As you learned today, Nighthawk takes his name from a fandom hoax. At least, that's the story Roy Thomas tells:

Richard Kyle had once pulled a fandom hoax by making fanzine-publishers Don and Maggie Thompson print a piece about an old pulp magazine or some such thing called NIGHTHAWK... obviously supposed to be a precursor of Batman. So as a joke, I took that name [...] and made it the name of the Batman homage in the Squadron.

But something seems to be missing.

The Thompsons did indeed run a mimeographed fanzine called Newfangles, sent to subscribers through the mail. In fact, you can read the first 10 issues 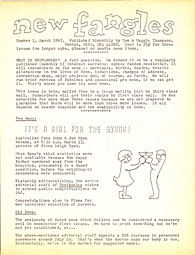 on Maggie Thompson's site right now. It's a fascinating look at the world of fandom pre-internet; sort of a "penpals by way of group SMS" thing.

Newfangles began by concentrating on fan news - which is to say, news about fans. Had a baby? Got straight A's? A promotion? Moving to a new state? You'd send the news to Don and Maggie in northeast Ohio, and it would get added to the newsletter and physically mailed out to all the subscribers around the world. It also discussed the same sorts of nerdy things we all talk about today, such as comics' creative teams changing, where and when conventions would be held, and rumors about TV and movie adaptations. (There really is nothing new under the sun!) Basically, if you can imagine a nerdy news site or Facebook group discussing it, it was present in Newfangles, as well.

So that's the fanzine Roy Thomas is talking about in his recollection of Nighthawk's origins. But the internet is an amazing place, where you can find nearly anything - and when you can't find anything, sometimes you can find anyone. Curious for more details about the piece that led to a Marvel character, and with only those first 10 issues available online, we turn to Ms. Maggie Thompson herself, who was kind enough to go digging through her personal archives to see what she could turn up!

Here, from September 1968's Newfangles #14, is the printed version of the gag:

Okay, nothing there about it being "pre" Batman, just a similar character.

The next month there was another mention:

You can tell Don and Maggie are already suspicious of him. Two months later, another update:

Interesting that Kyle tried to get someone else to back up his joke by writing a fake review. Was this a pre-digital example of a sock puppet? (We'd call it an "early" example, but Silence Dogood and Poor Richard Saunders would disagree.) Or did he really rope someone in on his shenanigans?

More importantly, if that's all that was ever printed about the fake Nighthawk book, where did Roy Thomas get the idea that it was meant to be a precursor to Batman? Is he merely misremembering something from five decades before? That would be the simplest answer.

A more conspiratorial mind might say that, both being fairly big names in the fandom of the early 1960s (Richard Kyle is the one who coined the term "graphic novel," for instance), it's entirely possible Richard Kyle and Roy Thomas had corresponded, and that Kyle told him the whole (unpublished) story he had tried to fool people with. Or, you could go really crazy, and even wonder if Roy Thomas is the one he recruited to submit the second fake review. That would certainly explain why Thomas seems to know more about the situation than is actually available.

What's definitely true is this:

There's some germ of truth there, and despite differences in the surface details, it appears Nighthawk did get his name from a fan joke. Even if it's unclear what the point of the joke was going to be.

Major thanks to Maggie Thompson for the research and the scans!

This entry was posted in addendums, comics, commentary, lists. Bookmark the permalink.