We'd give you an Endgame spoiler alert, but statistically, you and everyone you've ever met has already seen the movie.

Steve Rogers prepares for the ultimate battle to save the universe and channels all of his strength as Captain America.

You know, we may be going whole-hog with the spoilers on "Captain Thormerica" here, but you have to give Hasbro some big credit for not doing it themselves. Not only does that bio shy away from any mention of what makes this toy special, the packaging goes out of its way to hide the accessory as well. Even if none of that was true, Cap wouldn't have earned a spot on our list of Spoilers on Toys, since the toy didn't come out until several weeks after the movie, but mega kudos to the billion-dollar company for being cool about keeping secrets secret.

Also cool? That they didn't just reuse molds. Clearly they couldn't use the starless chest from the Infinity War Cap, but that's not the only new piece here. In fact, the only parts that are reused are his boots - from the knees up to the shoulder pads, everything is new and nicely detailed. 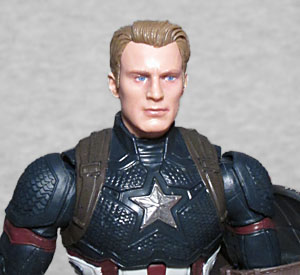 The masked head is the same one we got in the Captain America vs. Crossbones set, but the alternate unmasked head is not: it still has the same good sculpt, and the computerized face paint for the best possible likeness, but his haircut is slightly different. And definitely superior. There's still something that feels just a little bit off, something that makes the Chris Evans likeness not as perfect as the Scarlet Johansson one, but it's definitely the best any of Hasbro's Caps have yet had. 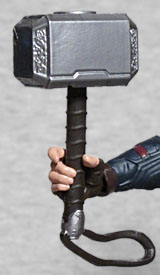 And then, of course, there are the accessories: his shield, and his hammer. Go on, admit it: when Thanos knocked Mjolnir aside and we got a close-up glory shot of it landing in the dirt, you knew what was going to happen. But oh damn, that payoff! Masterful! The Russos may be claiming now that Cap was merely pretending not to be able to lift it in Avengers: Revenge of the Fallen, but it seems more likely that he wasn't worthy at the time because he wasn't doing it for a purpose, just playing around. 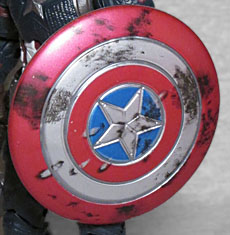 Surprisingly, this Mjolnir is a new mold - not the same one seen with previous 6" Thors. On those, the strap came directly out of the end, while here, it's attached to the sides. Cap's right hand is open to hold the handle, and the hinge in that wrist allows him to point the hammer nicely. The shield is not as new - they didn't do a "chopped in half" version, sadly - but it does get a terrific "battle damaged" paint app to make it look like it's been through a war.

Captain America is a Walmart exclusive (briefly dubbed "Power and Glory" on WM's site, but not called that on the packaging anywhere), so I was using BrickSeek to keep an eye out for it. It kept showing as Out of Stock, but when I stopped at the store on a whim, there he was! Checking in person is always a smarter idea. The most surprising thing is that they made this an exclusive, rather than putting it in the normal line; does that mean someone's going to have "Gauntlet Iron Man" as an exclusive, too?

I can do this all day.