For those who found the Iron Giant Minimate too small, DST also released a Vinimate, meaning that Cthulhu is no longer the only one to be an integratable size.

Arriving on Earth from an unknown point of origin, a colossal robot explores his new environment and befriends a young boy. But as aggressive 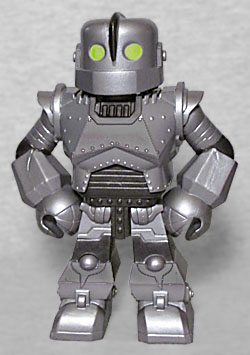 actions are taken against him by the military, he must battle his violent programming to be who he chooses to be.

Vinimates use the Minimates style, but are preposed vinyl figures, not actual action figures, so the only movement here is a balljoint for the head. He's standing with his hands on his hips - the classical "Superman" pose. The Iron Giant's metal body is well suited for the Minimate style, thanks to all the straight lines and easy angles. The hands get Minimatized, obviously, but the forearms look right, and the upper arms are sculpted with metal bands. The elbows just curve directly between the upper and lower arms, rather than even faking the kind of joints Minimates always have. Unlike the Minimate, the legs here are square rather than round (ie, meant to look like Minimate legs, not Minimate arms). The little rivets on his torso all stand out very nicely, and at this scale, the chest is able to have more depth than the Minimate chest cap allowed.

There are three Iron Giant Vinimates available: the standard edition;

Super-Hero Iron Giant, a 2017 SDCC exclusive with his homemade S chest shield (and side note: if the S had been a removable accessory instead of something permanently attached, I'd have gotten that one); and this, the Metallic Iron Giant, which was exclusive to ThinkGeek. As the name implies, the figure's paint is shiny silver, not flat grey. It's not chromed though, so it still looks good. Additionally, this one's eyes glow in the dark. It's a very weak glow, but it's a decent addition that sets the exclusive further apart from the others. 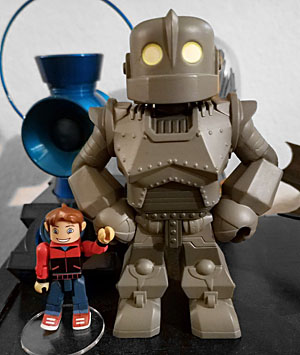 The Iron Giant Vinimate is still not as big as he should be next to Minimate Hogarth, but the size comparison is better between them than between Hogarth and the Minimate Giant.
Previous