Usually the Transformers BotBots are sold in blended multipacks: like, the package may say it's a "Jock Squad" 5-pack, but there will only be a couple actual Jock Squad bots in there, with the other slots handed out to members of other teams. The same is not totally true for the Arcade Renegades.

Currently only available via Amazon, the "Arcade Renegades Surprise" is a massive 16-pack, with eight new Arcade Renegades molds, and eight repaints or repacks. The packaging (which is huge, for the record: 13" tall and 12½" wide) is designed to look like an arcade cabinet, with the eight new Bots visible in the "screen" at the top, and the others hidden in the control buttons at the bottom. It's really cool! 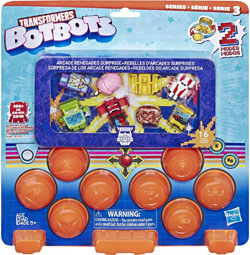 There are apparently six different versions, each with their own hidden BotBots; the package marked with the tiny "6" contains all Arcade Renegades, while the others have four of the repaint Renegades, and four rereleases from Series 1 that kind of fit the "arcade" theme. 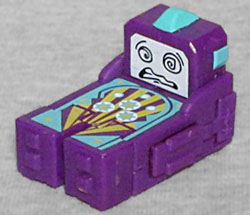 One of the new molds is this purple pinball machine. The original pinball games were a lot like pachinko, with, you know, pins? It's not called "bumperball" or "flipperball," right? But that was a long time ago, and this is a more modern style. The playfield should be more angled than it is here - if it's flat, the ball won't roll anywhere! The light blue and yellow used to decorate the top contrasts with the purple well, though the scoreboard area is clearly just a robot's face.

BotBots are, by design, easy to convert. Here, lower the shoulder flaps, tip the head back, pull the arms out to the sides, and rotate the feet down. Pretty simple!

Bankshot likes being a popular arcade game, but getting 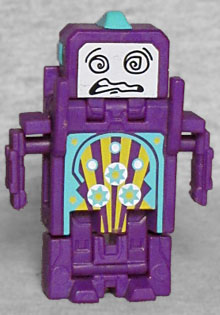 banged around all the time has knocked a few of her pinballs loose. The constant BING! PLINK! SHAKE-SHAKE-SHAKE! leaves her dizzy and disoriented. Once, poor Bankshot thought she was a vending machine.

That feels like a reference to something, but I don't know what. Future repaint, maybe? Bank Shot is a very blocky robot, basically just a big tablet with arms sticking out the sides. There are lots of details sculpted on the back, but they don't seem to represent anything real, and they have no paint - that's all reserved for the front. Her knees get molded divots that make them look mechanical, even if they don't move. Her face matches the "dizzy and disoriented" descriptor, with a crooked mouth revealing gritted teeth, and eyes that just have swirls instead of pupils. 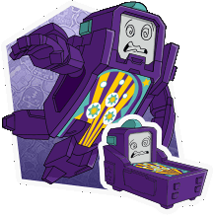 Bankshot's colors are nice, but the robot mode is a little bit uninspiring. Unique altmode, though, so we give Hasbro credit for that.