This Series 5 BotBot is part of the Wilderness Troop, the outdoorsy gang who'd rather be out in nature. And sure, he definitely fits, but does the Transformers BotBots mall not have a shoe store anywhere? That's, like, one of the last things that's still managing to hold on in real malls! 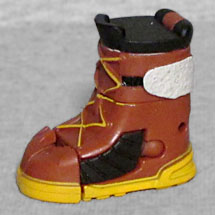 Like we said, it's not outside the realm of possibility that a camping store would sell hiking boots. They'd probably be more expensive there than at a shoe store, but they would indeed exist. This solo boot is a lovely, warm, shade of brown, with a yellow sole, black and white panels on the upper, and a padded black collar. The laces are yellow as well, and they've even sculpted a pull tab on the back. Some of these altmode really cut some corners, but this boot looks ready to handle all the steeps, sand, or slickrock you could ever want.

BotBots no longer come with instructions, so it's a good thing they're easy to convert. Lift the cuff and turn it around, pull down the toecap and fold it up, then lift the arms to the sides. 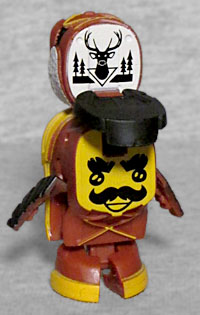 hidey OH NO! TIMBEEEERRRRRRRR! Lumbering Jack is coming down the way in his usual friendly mood, humming a jolly tune. The ground shakes with the rumble of his giant heavy boot mode getting closer and closer. Then CRASH! BOOM! AHHH! The sound of everything crashing down around him.

Somebody really went all-in while designing this one! Not only does he end up wearing a floppy baseball cap, which is pretty dang clever in its own right, the way the feet are formed make it look like he's still wearing a little pair of boots himself! Like that Croc wearing Crocs monstrosity, but subtle. And cute. He's got an old-fashioned mustache, and his hat has a graphic of a deer and some trees.

Lumbering Jack is available in the blind-packs as #23, or in a Party Favors 5-pack. But since the Wilderness Troop doesn't have any sets of its own in Series 5, there's no published art of Lumbering Jack anywhere to be found.