New year, new faction! Well, technically an old faction - between Series 1 and Series 2 of the Transformers BotBots, there was a bonus series, featuring two new tribes, one of which was the Bakery Bytes. "Series 1½" was intended to be a Toys "Я" Us exclusive, but that didn't happen. Eventually Amazon picked it up with absolutely no fanfare or even notice, but the important thing is we at last get access to some new molds.

Unlike the Sugar Shocks, who are all food items, the Bakery Bytes have a couple members that are cooking utensils rather than anything edible. 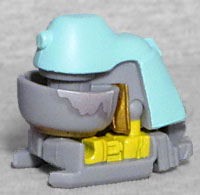 Well, I guess you could eat a stand mixer, if you were really determined and broke it down into small enough pieces, but that's not the intention. This is pretty accurate design, with the outer casing curing up over the top, the legs the device stands on, and the big mixing bowl right there in the center. Two of the Bakery Bytes have a color-changing gimmick: there's a spot on the side of the bowl that is supposed to match the color of the plastic (but doesn't), and it turns white when it's heated up. It'd be better if it didn't look half-white already. I left this one in the freezer for two days before taking the photo, so the paint would be as cold/dark as possible, but you can still see its outline. Why bother?

BotBots are easy to convert. In this case, all you have to do is fold down the arms and legs and stand the robot up.

Since Series 1½ was an exclusive, none of the characters have ever been shown on the website or in any merchandise, so there's nothing even resembling biographies for them - they don't even get to appear in the mall, just being dropped into lines 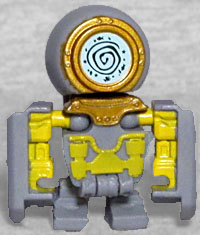 down below the scene. So in order to tell anything about them, we have to examine the art on the package. On the front, Batter Splatter is holding their head; on the back, they're stumbling around with lines circling their head. SO what we can tell is that they're made entirely dizzy by their life of spinning around all day.

Even their "face" deco supports this idea. Instead of a traditional face, Batter Splatter has a big, framed circle with a swirling line in it. Done differently, that could have felt like an old-fashioned diving helmet, but this art says "dizzy." The robot's body gets yellow decos that stand out well against the gray plastic, and the legs are set back a little farther than usual to help offset the weight of the mixer kibble. 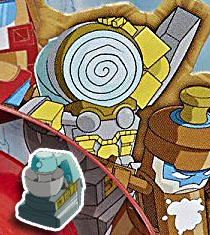 There are four Bakery Bytes five-packs, and Batter Splatter is available in all of them. The mold was reused in Series 4 as Whirlderful.