There really weren't a lot of really ripped-up zombies in the first series of Zombie Lab figures. Compare what we've gotten here to the various Walking Dead lines 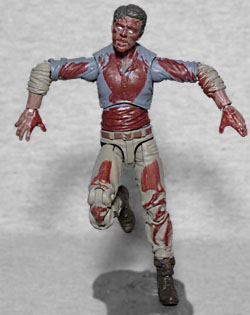 (comic, TV, Minimates), and you'll see how all these cadavers are fairly pristine. You've got to go back to the original George Romero films to find zombies who look this undisturbed. Sure, the modular construction of the Vitruvian HACKS body means you can take limbs off at your leisure, but that just leaves you with a toy that appears to be missing parts, not a zombie that appears to be missing anatomy.

This zombie comes from inside Tower 101, so he looks like a fully intact human who just happens to be covered in blood. He gets his molds from Jack: pants, boots, a henley, what have you. The colors are different, of course, even under the blood, with khaki pants and a short-sleeved blue shirt worn over a longer-sleeved gray shirt. And while he's absolutely blood-soaked on the front, there's none on his back.

The head is new, and even it doesn't really show any sculpted signs of zombism, relying on the paint to get the idea across. Like, without the blank white eyes and blood smeared everywhere, this could have been a totally normal human with slightly messy hair. It does make you wonder why the earlier waves of figures left their zombie eyes unpainted, 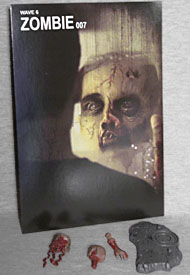 since a few dots of white make a big difference.

Like every other zombie in the line, this one comes with those same bloody accessories - a spine, a stomach with exposed entrails, and a human arm. At this point, it's all extraordinarily boring, since the design of them doesn't work with the majority of the figures. The art card is the best thing here, with a moody image of a zombie's face in a mirror. Of course, that one is missing a lot more skin than the toy itself, doing the toy no favors by comparison. A lot more could have been done to make Zombie 007 interesting - the very least of which would have been dressing him in a tuxedo like a British spy.