Now, we understand that when it comes to the Transformers BotBots mall, it doesn't make sense for the Lost Bots to be located in one centralized spot - there's no "lost and found" store visible with all the rest, so the members of the group can be found all over the place. Perfectly logical. But that doesn't explain why Sprinkeberry Duh'Ball is located up in a tree. 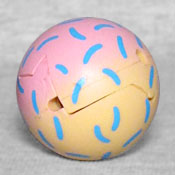 One of the BotBots shown on the official art used to announce the line was a little soccer ball, presumably meant to be part of the Jock Squad. As of Series 2, that ball still hasn't been released, but the mold at least has surfaced here, painted like a doughnut hole. It fades between pink and yellow, and is covered all over with blue sprinkles. For some inexplicable reason, there are six physical holes that run all the way through the figure - like, you can hold it up to the light and see straight to the other side. You could string a bunch of them like pearls. Why was it made like this, Hasbro? What was the thinking?

All the BotBots are easy to convert, but Sprinkeberry Duh'Ball is one of the simplest: pull half the ball down and spin it around to the back, then pull the entire body down out of the head.

Sprinkleberry Duh'ball is the brains of the operation. He can scam, scheme, and trick his way out of any problem. Don't bother questioning his plans, 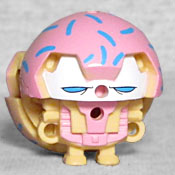 One of the downsides to reviewing BotBots at random (other than the danger of possibly reviewing members of the same faction two times in a row) is that sometimes one Bot's bio will refer to another, and we haven't reviewed that yet. So look forard to some day in the unpredicatble future, when we will link back to this review and say "see? That's what we were talking about." It's very apparent here that this mold was repurposed from the still-unreleased soccer ball, because the shape where the shell splits is hexagonal. The pink and yellow scheme works nicely, but the weird hole ends up right in the center of the face, and looks like a dopey mouth. 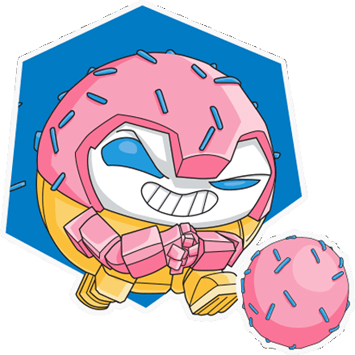 Being one of the Lost Bots, Sprink is only available in the blind-packed portion of various sets: a Backpack Bunch 5-pack, a Music Mob 5-pack, and a Swag Stylers 8-pack.