All the members of the Playroom Posse are based on (non-Transformer) playthings, which is why you'll find them in the east wing's seemingly hedonistic two toy stores! Kikmee is down on the ground floor with Q.U.R.O.B.O. 6000 and Quackules.

Hey look, it's the missing soccer ball! We've been waiting for this one 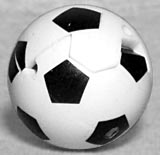 since before Series 1 came out, because the official art was part of the big announcement; but here it is Series 3 and it's finally seeing release (though not, as we predicted, as part of the Jock Squad. The ball is detailed accurately, with black pentagons and the suggestion of white hexagons between them. A real soccer ball wouldn't be perfectly round like this, instead having lots of flat facets, but that would have limited the mold's reuse potential. And as reader BBShockwave pointed out down in the comments, the holes that run all the way through the ball are there so children don't asphyxiate if they accidentally swallow it.

The only hard thing about converting Kikmee is finding where the split in his shell is - the line follows the shape so well it nearly becomes invisible. Once that's swung around to the back, you pull the body down out of the head, and you're done.

Kikmee never stops playing. He plays games, sports, and tricks. He's a fun-loving prankster who's good at causing trouble and tricking other bots into thinking 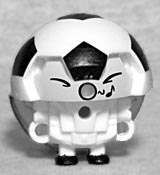 he didn't do it. Most of the time he gets away with it.

Oh, he's a prankster - like a "kick me" sign on somebody's back! The bot's tiny body is entirely white, so all the neat details that were visible on Sprinkleberry Duh'ball just blend together here - the only things differentiated here are his black "shoes." The face is at least gray, and they've used the hole in his face to be a circular mouth with a musical note coming out of it, like he's singing or whistling. That's smart! His eyes are just slits, closed tight. The original promo art showed him blue eyes and an open mouth, while the final product more closely reflects the toy. 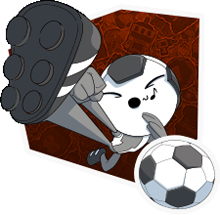 Kikmee is available in two of the Series 3 Playroom Posse 5-packs. That's a lot more numbers than a soccer ball is usually exposed to!