The claim that "Black Friday" refers to 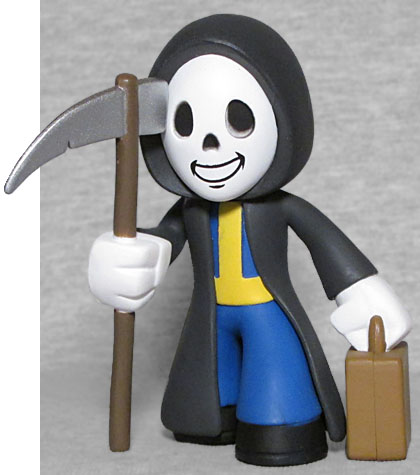 retailers being "in the black" due to high sales dates all the way back to 1981; but that's just whitewashing. Two decades earlier, the term began in Philadelphia, where it was coined by the city's traffic cops, and referred to the increased accidents and deaths that happened on that busy shopping day. So we're celebrating with the Grim Reaper. A Grim Reaper. The Grim Reaper's Sprint Perk from Fallout.

I still haven't played any real Fallout games, but the retro art used to illustrate the game's verious "perks" (bonus abilities) is iconic, and translates perfectly to the Mystery Minis style. So when the first series of Fallout Mystery Minis was released, I went for the one that actually looked like something.

The Mini depicts the Vault Boy as a classical figure of death, 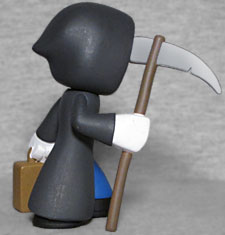 with a hooded black robe worn over his blue-and-yellow vault jumpsuit, and a bone-white face and hands. The icons in Fallout 3 were uncolored lineart, so it wasn't until the release of Fallout 4 that we learned he was still supposed to be a pink skin color. The eyes and nose are sculpted holes, while the mouth is simply painted. He carries a scythe and for some reason a briefcase, and despite being named "Grim Reaper's Sprint," he appears to be walking at a normal pace. The art doesn't suit the name any more than the name suits the effect (if you kill someone while using the VATS system, all your action points are restored).

Even if you don't like Fallout, this is a happy Grim Reaper toy and thus a fun thing to have in your display.