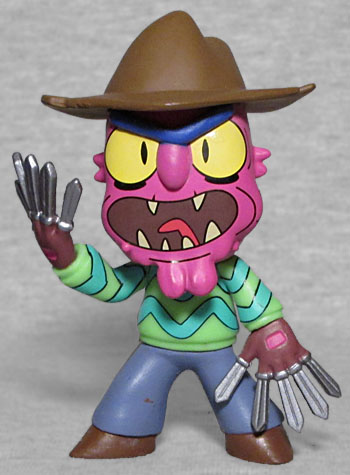 The Rick and Morty episode "Lawnmower Dog" introduced Scary Terry, a legally-safe knockoff of an '80s horror character with miniature swords for fingers instead of knives. He's some sort of a dream master who can draw his victims into a new nightmare, a final nightmare, where (unless that dream child can prove to be a dream warrior) he can have his revenge! ...vs. Jason?

(Yes, we had this whole set of plans for what we'd review on Funko Fridays during Horror Month, and then the Walgreens-exclusive Universal Monsters demanded attention, so now the spooky things are spilling over and rubbing elbows with all November's important events. Watch your back, National Harvey Wallbanger Day!) 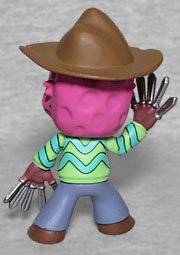 Obviously a pastiche of Freddy Krueger, Scary Terry has scarred pink skin, large yellow cat eyes (making him one of the few R+M characters to not have badly drawn pupils), and a sculpted unibrow. He wears a tattered fedora, a stripey sweater, and sword-gloves on both hands instead of just one. The stripes on the sweater are not straight but jagged, which makes it feel very much like something Bill Cosby would have worn, at once making Terry less scary (because it's very avuncular) and more (because of Cosby's notorious philanthropic work).

I wasn't looking for Scary Terry in this series of Mystery Minis, but he was pretty hard to avoid while trying to collect all the Vindicators.

This entry was posted in blog exclusive review, Funko and tagged Adult Swim, Nightmare on Elm Street. Bookmark the permalink.