Some exciting news surfaced the other day:

LOS ANGELES, CA (January 7, 2010) - Bif Bang Pow! and Cartoon Network Enterprises, the licensing and merchandising arm of Adult Swim, blast off for action with today's partnership announcement that will bring to market a brand-new line of toys based on the popular animated series The Venture Bros. One of the most highly sought after product lines from Adult Swim’s library, The Venture Bros. collection from Big Bang Pow! will feature an array of articulated action figures, bobble heads, and vehicles, each embodying that distinctive action-comedy mix that has become synonymous with the series. 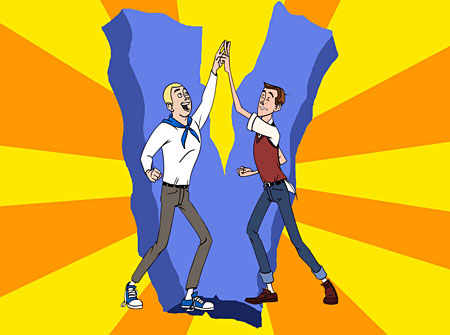 First to be released from the line is a series of 7"-scale resin bobble heads targeted for spring 2010. Action figures are scheduled to hit the market in the summer of 2010. These fully-articulated figures will include the series most popular and recognizable characters including Dr. Venture, The Monarch, Brock Samson, Hank & Dean Venture and more. Several exclusives are also in the works. More detailed information about the products will be made available in the coming weeks.

"We've been courting The Venture Brothers for quite some time now, and we're beyond excited to finally bring fans what they want: a range of fully articulated action figures and bobble heads," said Jason Lenzi, CEO of Bif Bang Pow! "With the ever-expanding cast of characters in the Venture universe, the possibilities are endless. And, as always with Bif Bang Pow!, expect the unexpected!"

“A toyline based on The Venture Bros. has been a long time coming but we now have the ideal partner on board to bring these characters to life," said Christina Miller, senior vice president, CNE. "With their distinct style and love for the series, the team at Bif Bang Pow! has created an impressive line that will excite our fans and meet their discerning tastes."

The Venture Bros. creator Jackson Publick, who has been working closely with Bif Bang Pow! on the planning and creation of the toyline, adds, "Finally. It's about time someone made some action figures based on the show. This is going to be great!"

About Bif Bang Pow!
Bif Bang Pow! (bifbangpow.com) produces first-rate collectibles for such popular properties as Dexter, Lost, Californication, The Venture Bros., The Twilight Zone, The Big Lebowski, and Flash Gordon. Founder Jason Lenzi is a seasoned television producer and the ultimate fan of cultish pop culture. So when he created his company in 2005, he took the fan's perspective. His idea was to bring items to the marketplace that he himself would want to own. Cultivated from TV, movies, books, comics, music, and more, Bif Bang Pow!’s mission is to provide high-quality action figures, toys, and collectibles to the massive cult audience (and kids of all ages) that wishes these toys were already in their collection. Bif Bang Pow! is a unit of JLA Direct, LLC.

About Cartoon Network Enterprises
Cartoon Network Enterprises (CNE) is responsible for building consumer products and merchandising programs for a wide range of brands by securing and supporting long-term licensing partnerships across all categories. As the global branding and merchandising arm of Cartoon Network and Adult Swim, the division manages the consumer product programs for the networks' award-winning original programming, brands and characters including Ben 10, The Secret Saturdays, Chowder, The Marvelous Misadventures of Flapjack, Adult Swim and more. CNE also serves as a third party licensing agent through strategic partnerships with Nelvana Enterprises and Spin Master for the award-winning Bakugan brand, CAKE Entertainment and Fresh TV for the hit Total Drama franchise and the PGA of America for the youth marketplace.

Turner Broadcasting System, Inc., a Time Warner company, creates and programs branded news, entertainment, animation and young adult media environments on television and other platforms for consumers around the world.

Let's just hope they really mean "action figures," and not those Mego knockoffs they love so much. 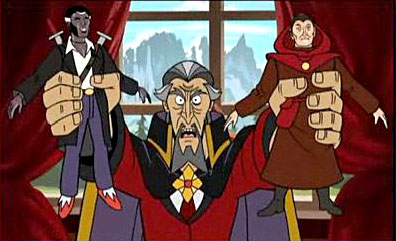