The hunt for NECA's latest releases continues ever on, though now reduced by a quarter with my finding of the Lone Ranger figures. PLUS, I scored the Toys R Us exclusive first series of the long-awaited return of Star Trek to the Minimate multiverse! Not a bad way to kick off the next hundred Spoils of the Weeks! 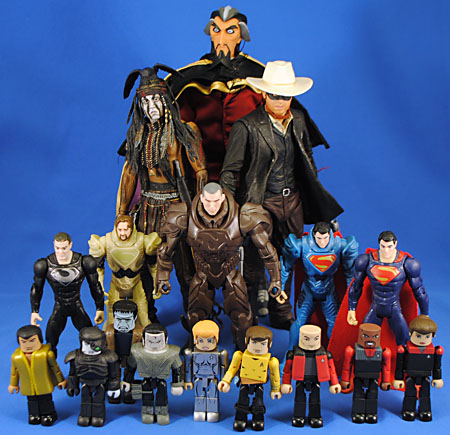 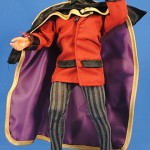 So I finally started watching the Venture Bros and guess what... it's great! I fell in love with the brilliantly absurd Doctor Orpheus. His pants use stirrups under the shoes to stay in place. His triangle logo is printed on the full cape's back. His medallion is two bits of fabric glued to his cape and both had fallen off in the package - nice. It's a good figure for being "retro" but really represents everything I hate about the format and about "softgoods" in general: he's wearing not 1 or 2 or 3 or 4 but 5 - FIVE - layers around his neck! As a result his chest is very puffy and indeed it is really hard to get the velcro to stay together. Worst though is the remarkably poor production quality. Rather than sloppy paint we get sloppy seams with various-lengthed strings protruding from virtually every terminus! Sure I can trim them, but that shouldn't be my responsibility after having paid $20. 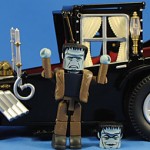 I finally got around to picking up this Minimate vehicle and it's pretty cool! The Munsters' Koach is a pretty iconic car and is definitely a requisite for my Munsters collection, plus I really dig this one as a smaller, cheaper alternative to the replica DST put out. I was saddened to see that the doors don't open, but the roof does so you can get figures in there if you'd so choose. Of course, that brings up the only real shortcoming with this set - there aren't any other Munsters Minimates! I really hope that DST gets a 4-pack with Lilly, Grampa, Marilyn and Eddie (heck, a 5-pack with Uncle Gilbert would be even better!) out as a nice one-shot to complete the family (and I bet they'd see sales of this pick up too - I know one of my main reasons for waiting was lack of other 'mates). Herman gets an all-new head sculpt and is packed with two so that you can choose between smiling and frowning. Since they aren't doing the iconic frown in the Select line I opted to put that head on this one but for some utterly inconceivable reason the peghole is too small to fit on the neck and it took a lot of effort to get it on (and thus I shan't be taking it off). Despite the drawbacks mentioned, this is a great vehicle and a great Minimate! 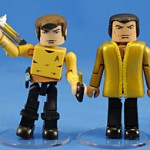 We get Wrath of Khan Kirk & Khan in the direct market line so it's quite nice that we get TOS versions in the TRU one. Khan is wearing his stylish gold dinner jacket, which is a nice touch since they already did him in the red jumpsuit in the earlier line. His chest is fully painted on which points to the main flaw in this set - no alternate bare arms. Come on - it's Khan - his rubber chest is the envy of all! Kirk is a great update to the standard duty outfit. He comes with an all-new phaser, rifle and communicator. His pants are painted matte while his boots are glossy. Not so awesome are the new, thin squares slid on to demarcate the hem line of the pants. Like the previous line, these really only serve to force the legs awkwardly apart - even worse since this Kirk uses that awful too-short-left leg. The real star here though is Kirk's gold sash/belt! It's the first time since Playmates' old line that this has been put on a collectible and its a tiny detail that a hardcore Trekkie like yours truly loves and really appreciates being included! 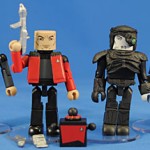 Boom - this is the one kids, go get it right now! On one hand we get the iconic Hugh Borg from the awesome "I, Borg" episode. It's a great 'mate of him but sadly there is no chest paint (though there is paint on the sides under the arms - great attention to detail!) nor alternate Borg parts. This wouldn't normally be a problem but there are so many variations to the Picard here it'd be great if Hugh could double up. Picard not only comes with a phaser, phaser rifle, tricorder and dagger... he also gets two alternate arms and an alternate torso with collar. That's right folks - you get THREE different costumes from one set!!! Too awesome! He comes packed wearing his "captain's jacket," a neat but oh-so-silly costume which never made much sense to me, especially for this character. More importantly though, you get the parts to strip him down to just the gray shirt, plus with the awesome inclusion of what is clearly Dathon's dagger we can now create his look from one of my very favorite episodes - "Darmok"!!! If only they had given us a Dathon to go with him... but really I'm just so thrilled to get at least this figure I'm pleased as punch as is. Darmok and Jalad, at Tanagra! 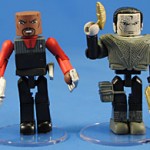 Last time we got this exact character pairing, which has me worried about potential sales drops, but fortunately both figures are different enough it's still worth getting. Most obvious is that Sisko, now very pissed off, sports the Captain's vest from First Contact and comes wielding a TNG phaser rifle, phaser and tricorder. Like Picard and Janeway he gets a removable waist piece with a peg on it for the phaser to connect to, but they come assembled with the peg on the right when it should be on the left. Dukat gets an all-new torso piece (they even sculpted in the details on the top of it to allude to the famous neck), all-new upper arms with the armor sculpted on, a phaser holster and a new Cardassian phaser and rifle - not bad! Last time Dukat "accidentally" came with a Damar face printed on the back of his head and it's really a shame something like that didn't happen this time because I'd really liked to get a second second to headswap with Picard, but I don't really a need a third Dukat. 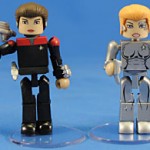 Aaaand at last DST breaks down and gives some love to the worst Trek ever officially enacted (and yes, I'm including Enterprise and the TOS cartoon). This set is just as underwhelming as the show and has "this is all you're getting" written all over it. DST really bungled up the line last time, and they're doing the same "hodepodge" thing this time but I think going with the "all the captains" theme is a smart first move, though some of the additional character choices don't show long-term thinking and 7 of 9 is a perfect example. 7 is a good Minimate but it doesn't fit with the "captain + villain" theme and really short-changes options they have down the road (ugh, unless this means we'll be forced to get her in her proverbial rainbow of jumpsuits...). The other problem with this pair is that it's so plain, especially compared to every other set in both series. It's just two simple Minimates with only two unique accessories - the Voyager rifle and wrist... thingie. Even as a hater I think this is cold treatment of that show. 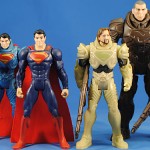 I picked this up mainly to "complete the collection" since it comes with two (technically four) exclusive figures. Armored Superman Is another repaint of the Kryptonian armor body and is surprisingly (as in "why bother") similar to "Strike Shield Superman," but at least it's unique to this set. Superman is a nice 4" version of the character. He comes with a re-colored car door accessory - woo hoo. I'd read that it's essentially impossible to get him to stand but I've had no problem keeping him upright. Jor-El is the first of the proper exclusives. Using the same armored body as as the first Superman he oddly lacks the cape seen in the film and on the DCD statues. He does come with a darn nice (if not oversized) Kryptonian rifle. His head is a pretty solid sculpt for this line but I wish his "S" was darker. Zod I had hoped was identical to the carded version and had a goatee but alas he does not. Thus, this is a "single shot" figure that lacks the signature accessory he had in that single shot - nice. Namek is the other proper exclusive and also the key selling point since he's a whopping 5" tall! He's of the same quality of the rest of the figures of the line, but sadly his pauldrons are so tight to the shoulders it renders his balljoints useless. He's also weirdly in a different shade of plastic than armored Zod and sadly lacks a helmet, which also makes him annoyingly a "single shot" figure. Perhaps they'll do another "Smallville Attack" set with a helmeted Zod and Namek (and Faora if they do her in this scale). 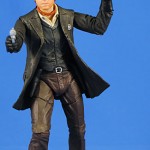 What is up this figure? Is he one per case? Across two TRUs I found five Tontos and one Ranger, and I can't really believe (especially based on the volume of Tonto reviews out there) that he's that much more popular of a figure. Regardless, he gets the blessedly now-standard NECA treatment of tons of articulation with balljoints, or their equivalent, at every point - killer! His pelvis is a soft rubber cover which can get caught in the hip joints and look a bit weird. He gets his trademark pistols and white hat; the former fit in the holsters with a little work and the hat fits snugly on his head and looks quite natural both on and off. And that brings us to the face... this just not a poor likeness, and is particularly bad as compared to NECA's recent work such as Rocky, Dutch and the Aliens marines showing up now. Not only does this not look like Armie Hammer (woof - what a name) it just looks like a completely non-descript sculpt of a generic white male. Between recent reports of Johnny Depp leaving films and the peculiar Tonto-specific marketing of a film called "The Lone Ranger" I can't help but wonder if this is some sort of sabotage by Depp to ensure he's the most successful guy in the room. 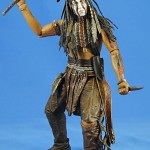 Everyone has been raving about this figure and I just didn't get it. He's a good figure of a mediocre character/costume design and though I generally love sculptural texturing that heavy cracked look on the face just looks tacky as hell to me. Well, once open and in hand I have to admit this is a pretty cool figure. He gets all the same articulation as the Ranger above but they all move so much better on Tonto (probably a result of his bare skin sleekness). I particularly dig the moccasins which are on the outside of the pants, rather than in or under as with all other figures. It gives them a lot of range and they look good/believable in most every pose. He gets a tomahawk and a knife too, the latter fits in his belt sheath, to give him something to do with his poseability. It's really, really a shame that I don't care for this look much at all because this really is a far better toy than it deserves (and much more sadly, better than the titular hero of the film's figure as well).