Have you ever been to a comicbook show in a hotel? You know, the kind that's scarcely more than a targeted yard sale? Or perhaps you've gone to the mall on a weekend when they're having a sports card expo. Whatever the case, you're familiar with rinky-dink little shows that don't really offer much to anyone who's a hardcore collector.

Well, the Greater York Toy Extravaganza isn't one of those.

They hold this show every year on the Sunday after Thanksgiving. That doesn't sound like an ideal time to me (aren't people supposed to still be spending holiday time with their families at that point?), but at least the schedule is easy to remember.

I drove into town yesterday, being escorted by some pretty steady snow the whole time. Well, other than when you go through those big tunnels on the Pennsylvania Turnpike. Those are awesome! There's one that's a long tunnel, a gap of about 100 yards, and then another long tunnel.

But I'm supposed to be talking about a toyshow, not reviewing the interstate highway system, so let's get back on topic.

This was the show's 31st year, and it really lives up to the "Extravaganza" name. It's set up in an exhibition hall at the fairgrounds, and while that sounds like just about the most hayseed sentence you can imagine, it's really fairly impressive. The show fills both halves of the hall, totalling about 28.000 square feet! The west hall is mostly antiques, retro ('60s and '70s) toys and die cast cars, while the east hall is more modern stuff. And both halves of the show are just packed with people: 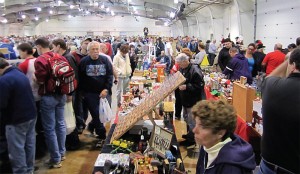 That's the West Hall, but it's pretty indicative of the crowd on both sides.

East Hall is where you'd find all the stuff we care about: you've got people scalping new releases you can't find on store shelves yet or looking to flip their Mattel subscription figures; big bins of loose Marvel, DC, and various cartoon toys; vintage graded Star Wars figures; old stuffed animals; and more McFarlane SportsPicks than you can shake a stick at. 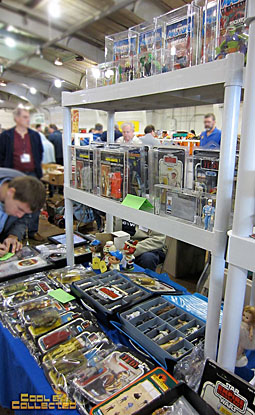 The new stuff is mainly for the people who would pay eBay prices or buy from an importer just to say they were the first to own a new toy - you know, "suckers." But if you've got your eye on some older toys, you can definitely get good buys. There were tables full of Star Wars Legacy Collection figures (the ones with the card shaped like a Stormtrooper helmet) for $5, for instance.

And that's not to say you couldn't buy newer releases at reasonable prices - it's just that they tended to sell out fast. 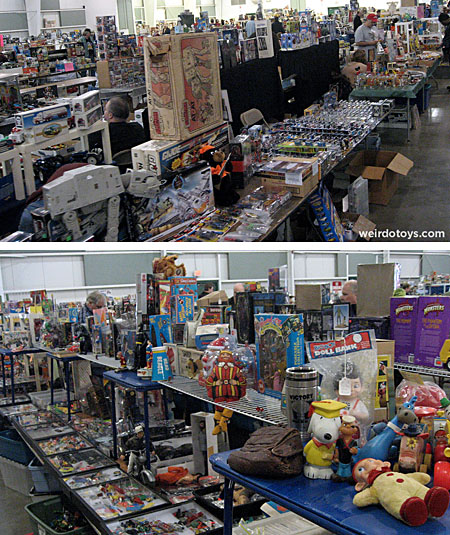 Admission to the show was $5, which seems quite fair, considering the number of vendors you'll see inside. The hours are kind of crappy, though: it's only on Sunday, and it runs from 9-3. Six hours? Yes, that's enough time to see everything, but wouldn't something along the lines of noon-6 be better than 9-3? Apparently you can get an "early buyer" pass that will get you in while everybody is setting up, but for $20 that doesn't seem worth it to me.

I had a lot of fun at the 31st annual Greater York Toy Extravaganza, even though I didn't come away with a huge haul - just a few new Marvel U figures for less than I would have paid at retail (after adding tax), a Chicago Bear I picked up on impulse, and a Simpsons Treehouse of Horror set whose beat-to-hell box meant a really low price.

As far as cool stuff I saw, there were two people selling the GI Joe General playset/vehicle, and someone had a Terror Drome that was in dire need of a bath. I was also tempted by a Mego Wolfman, but he was too expensive for my blood. This definitely was an extravaganza, and you should go if you ever get the chance.

Plus, as a bonus, when you're leaving the show, you can also make quick stops at Toys Я Us, Walmart, Target, Big Lots, Marshall's, TJ Maxx, Ollie's and the mall. So basically, you're right there in the heart of toy-shopping territory.

And now, to close, here's a video of the 2009 show floor (though apparently taken at some point when barely anyone was around:

This entry was posted in reports, shows, videos and tagged Adult Swim. Bookmark the permalink.