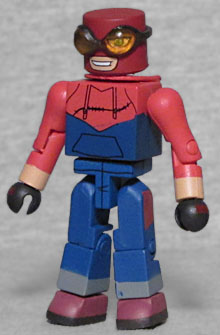 In his earliest days of crime-fighting, teenager Peter Parker wore a cobbled-together version of his now-famous Spidey-suit.

Disney's Marvel's Spider-Man is inspired by Homecoming, so Peter started off wearing a sweatsuit and goggles. The goggles are removeable - the front of the packaging even proclaims it so - and he has a hood laying against his back, but the rest of the details are simply paint on: the drawstrings, a stitched-up slash across the chest, the red panels on his gloves and pants, all of it. Well, technically they're Aunt May's pants, but you get the idea. His head/mask is darker than the rest of the suit, which feels like an error but is accurate to the show's design. The figure comes with a curled up web line and one of the "flip" waist stands. 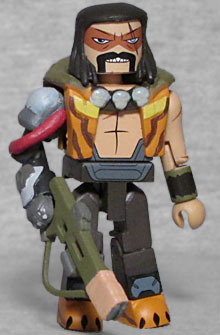 The host of "Kraven's Amazing Hunt," Sergei Kravinoff was hired by Norman Osborne [sic] to hunt Spider-Man, enlisting the Scorpion to assist him.

This cartoon's version of Kraven is weirder than his comic counterpart. He's still got a lion-head vest, but it's held closed by a band with three small skulls on it, and his shoes appear to have claws on the toes. He himself has dreadlocks, a blank eye (probably caused by the big scar over it), and sharpened teeth. Also, his right arm is seeingly robotic, and a new mold for this toy with tubes and armor plates to best match the show. He's armed with a fancy new rifle, as well, meaning this exclusive Minimate has a surprising amount of new pieces.