The newest Walgreens exclusive lets you build three figures, so let's pretend they're each their own thing. 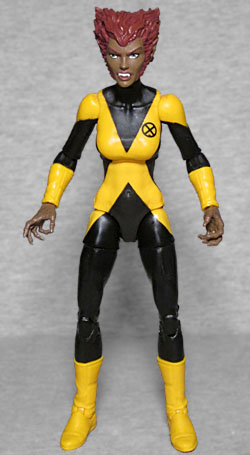 Part of a group of young mutants, Rahne Sinclair has the ability to morph into a fully lupine form or assume a transitional werewolf form.

The only bio on the back of the packaging is for Mirage, so that text is just our reworking of her copy. Rahne is a devout Christian, raised by the hellfire-and-brimstone Reverend Craig, a Presbyterian minister who constantly berated her and told her she was a wicked sinner. She grew up in an environment of repression and shame, and so was slow to come out of her shell when her friend Moira MacTaggert brought her to America... except with Moonstar, whose powers included a rapport with animals, allowing Dani to become very (very) close to Rahne thanks to the younger girl's wolf form. (And side note: knowing what we now know about Moira, post-HoX/PoX, do you think the reason she took such a motherly interest in Rahne was that she knew, first-hand, what would become of the poor girl if she didn't?) 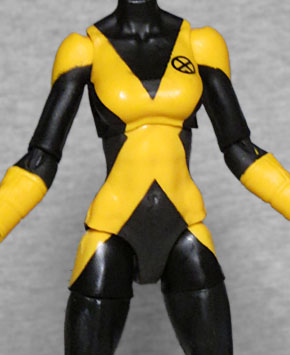 No surprise this figure is made on an existing body. This particular costume is... most similar to the one the team wore in New Mutants Vol. 3, but Rahne wasn't on the team at that point - she was hanging out with Wolverine's X-Force at that point. Also, she's never been one to wear a full costume over her semi-wolf form, and this body is too tall for her - she's always been a wee little slip of a thing. The costume is appropriate for an X-Men team, a black suit with a giant yellow X covering the entire torso, and a small circular-X logo on the breast. The gloves and boots are new, with panels sculpted on the insides.

There was a Wolfsbane figure before, decades ago from ToyBiz, so none of those pieces would stand up to modern standards. That's why this figure gets a new head! Her hair (fur?) is a reddish shade of brown, while her skin is greyer. That, with the distinctly Wolvernie-ish haircut, really makes up think this mold may be reused for an X-Factor Wolfsbane sometime in the future. (And maybe an X-Force Feral, though the hair should really be bigger for that.)

She also gets new hands with claws on the fingers, 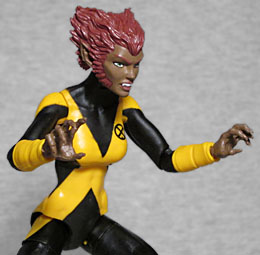 something else that would work for an X-Factor uniform. Swapping the head and hands is surprisingly tough; they just don't want to go onto the figure. It's a shame there was no way to give her a tail.

This set also includes parts to turn the figure into either Mirage or Karma, meaning it's going to be three times as in-demand as regular, with people looking to have all of them on display at once. You know, like these exclusives weren't hard enough to find already. Come to think of it, Magik's head would probably fit on here, too. And maybe it wouldn't sit as unnaturally high as the others do.