There's something interesting to be found in the Rise of Skywalker Visual Dictionary: the character Rothgar Deng.

He shows up in a bar on Kijimi, the world where Poe takes everyone to meet his Power Ranger ex-girlfriend and Babu Frik. Here's what the book has to say about him: 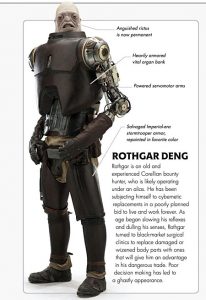 Rothgar is an old and experienced Corellian bounty hunter, who is likely operating under an alias. He has been subjecting himself to cybernetic replacements in a poorly planned bid to live and work forever. As age began slowing his reflexes and dulling his senses, Rothgar turned to black-market surgical clinics to replace damaged or wizened body parts with ones that will give him an advantage in his dangerous trade. Poor decision making has led to a ghastly appearance.

It also says he's wearing salvaged Imperial-era armor, repainted his favorite color. Mud brown is his favorite color? Okay then. Anyway, this is clearly a future version of Dengar, plus about 20 years of bad life choices.

This entry was posted in addendums, videos and tagged Star Wars. Bookmark the permalink.