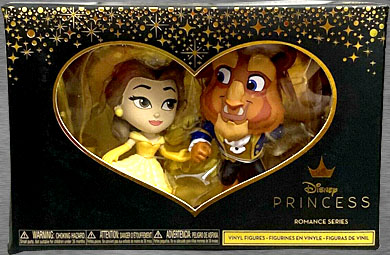 a set of four pairs of figures, based on some of Disney's iconic couples - Naveen & Tiana, Eric & Ariel, Flynn & Rapunzel, and Belle & Beast. With their couples theme and their stylish black-and-gold packaging with a large heart cut out of the center to frame the figures within, they seem like they were meant as a cute Valentine's Day gift for that Disney-obsessed person in your life... so naturally, they didn't reach stores until late March at the earliest. And that's why you didn't get any last February 14. 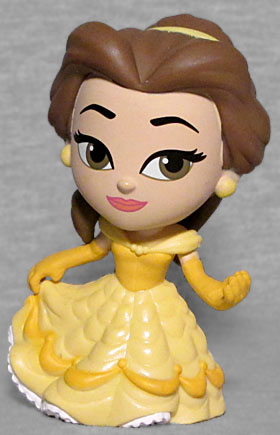 It's interesting that this set is the only one to put the heroine first - that's not any sort of commentary, it's just that this is a "Tale as Old as Time" set, and that best matches their pose in the scene. Belle is of course wearing her familiar yellow dress, which is stylistically about a century ahead of what it should be for mid-to-late 18th century France - either because the designers knew that a proper period dress would have those ridiculous huge hips and they'd look silly, or it was done intentionally to show how forward-thinking Belle was. (Spoiler: it was not that.) She's holding out her left hand, and slightly lifting the right edge of the dress, revealing the many frilly layers beneath. Her hair is pulled back in a fairly simple folded ponytail thing, because she's a smart and practical girl - no need for extravagance. 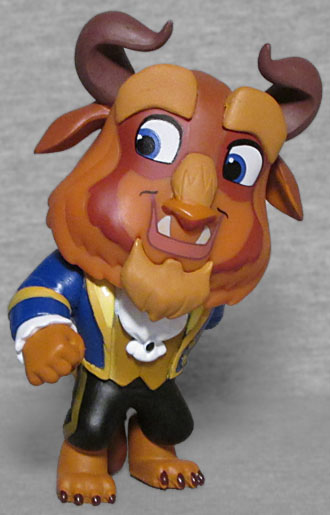 story (which, side note, was published in a magazine for girls - it's not at all weird or unusual for the time period that Belle would be literate), the character arc was all Belle's: Beast was always a perfect gentleman, and it was about her learning to see past his appearances; Disney made her warm and accepting, and it was Beast who had to better himself (because he wanted to do it for her, rather than relying on her to be his life coach). Like, he originally just wore pants and a cape, and was all hunched over, but as his feelings for her grew, he started standing up straighter and, as seen on this mini, even donned a full suit of clothes. Why? Because he wanted to be up to her standards. (For her part, she doesn't care about "fixing" him, she only ever reflects the vibe he's putting out.) He's posed with his right elbow extended gallantly toward Belle, and his left arm tucked behind his back. His wolf-bear-wildebeest-whatever face works well in this style, and he's got his head tipped gently to the side, because he can't take his eyes off the girl he's got feelings for.

The Romance Series figures aren't technically Mystery Minis, but they're about that size: Belle's about 2¾" tall, and Beast is 3¼". There's no articulation or anything, but the two are posed perfectly to interact with each other, with Belle taking Beast's arm as he leads her down the staircase. Even a small molding problem would have left them forever separate, not linked as they deserve to be. 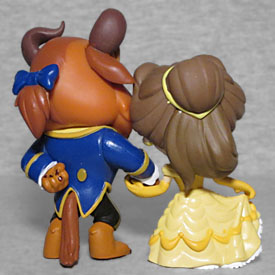