We're reviewing Horror Classics Mystery Minis for October, and you thought I wasn't going to do the werewolf? 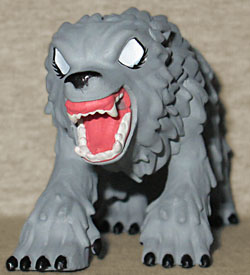 This Mini is based on An American Werewolf in London, John Landis' 1981 monster movie. With creature effects by Rick Baker (he left work on The Howling to do this film), AAWiL was the first movie to ever earn the Oscar for Best Makeup. And yet the original plan was to leave the wolf an unseen, off-camera presence for most of the film - it was only after Landis saw Baker's designs that he decided to shoot more scenes with the wolf visible, because it was just so cool.

Rather than going with a mid-transformation David, or a zombie Jack, or even a hallucination monster 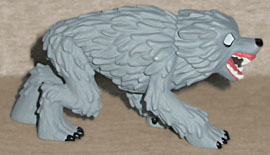 (like some companies would do), Funko went right for the wolf. He's gray and shaggy and stands on all fours, in exactly the same pose as the lifesize prop you could buy (which presumably means it's from some point in the film). The fur is done in large chunks, suiting the Mystery Minis' deformed style, and his mouth is open to bite. Honestly, the face looks better on this toy than it did in the movie - this is just a cool little wolf figure.

The Werewolf is one of the 1:24 figures, meaning he's not in every case, and since the release of Horror Classics Mystery Minis Series 2 predated @funko_layout, it took me a long time to find him.