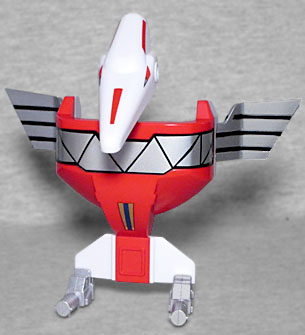 How, exactly, are these the "Dino"zords when the Triceratops and the T-Rex are the only two that are actually dinosaurs? Pterosaurs diverged from dinosaurs 250 million years ago, which was about 100 million years before pterodactyls themselves showed up. It would be like having a group called the "Carzords," but two of them were motorcycles and one was a hot air balloon.

This is easily - easily - the worst figure in the entire Loyal Subjects Mighty Morphin Power Rangers lineup. It was designed by Frank Pepito, who either didn't do his research, or was given bad information to work from. In the show, the Pterodactyl Zord was used on its own like a plane - in other words, laying flat. 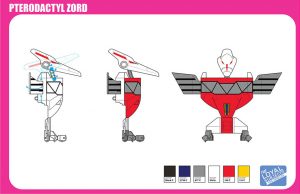 When it joined with the other Zords to form the Megazord, it sat upright, becoming the big robot's breastplate. This toy completely disregards the solo mode, and only has details for the combined mode. Yeah, that's great, but these Zords don't combine. There are strange little tabs on the back/top that look like they'd be used for combining, but actually serve no purpose. Was the plan at one point to make them combinable? Is that what Frank was told to make? As it is, this doesn't feel like a superdeformed version of the Pterodactyl Zord, it feels like a superdeformed version of a '90s Pterodactyl Zord toy, right down to the removable guns that serve as feet. You can get it into a horizontal pose, thanks to the articulation, but the back is completely undetailed, and doesn't even get any paint. Just the worst.

The Zord comes with a card featuring the bio we quoted above and a checklist of figures on the back, plus a totally fun extra: a tiny Pink Ranger figure! It stands only about an

inch tall, and its only articulation is a single hinge through the hips - the more of these you look at, the more obvious it is they're based on the 1995 movie costumes and not the TV show: the show's outfits were cloth, rather than plastic armor, there would be more white on the chest and back, and Kimberly would be wearing a skirt (which definitely wouldn't have changed this articulation at all). Pink was not one of the Rangers re-cast prior to the movie, so this is definitely a tiny plastic Amy Jo Johnson. Her ponytail hangs out the back of her removable helmet, which is probably not accurate to the movie costume.