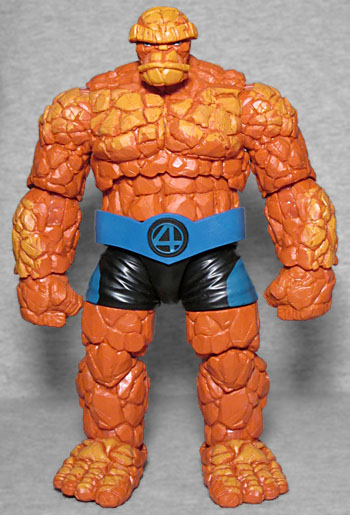 As you'd expect, this figure shares almost all its sculpt with the Walgreeens Thing; that was an entirely new sculpt, and it was way too distinct (and probably way too expensive) to not use again. To convert him from his retro costume to his modern one, they've given him a new belt, one which just rests around the figure's waist rather than being sculpted on or attached in any way. He only gets the fists, not the open hands, so already this mass release is less special than the exclusive. And then there's the paint.

The last figure was a nice strong orange, with a darker wash in the cracks between the stones, making him look very much like a comicbook panel

come to life. This new version is nearly the same orange, but doesn't get the wash and instead has one of the most amateurish attempts at highlights ever put on a mass-produced toy. It's light yellow, painted on blocks on his chest, shoulders, forearms, and feet, like they were going for a "cartoon" look. It's like something I could do myself, and I'm no good action figure painter! Horrible! The worst part is this figure gets a new head, the classic look with the big eyebrow ridge and the rounded lower jaw, but you can't even try swapping it over to Walgreens' figure because it, too, has the cheap yellow paint all over it, ruining the look. What a waste!

If not for the Build-A-Figure parts, we'd say you could ignore this figure entirely. The BAF is the Super Skrull, and Thing has two heads for him: one smiling, one stern.