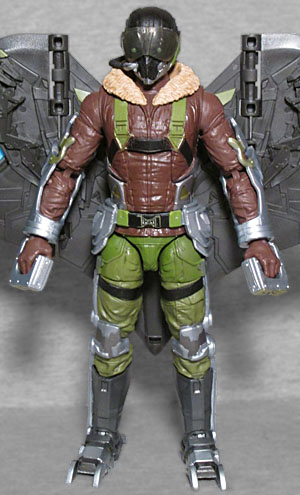 With an impressive flying apparatus, Adrian Toomes soars through the skies to threaten Spider-Man.

Some people are insisting that because Hasbro has just released this exclusive Homecoming Vulture, it means he's going to be in the new movie. Don't be silly, they do this sort of thing all the time. Did the release of the Spider-Man and Michelle set mean Peter was going to wear his Debate Team jacket again in Far From Home? Of course not. So this figure means Vulture is coming back for No Way Home? That's foolish. The fact he's in the Lego set is what means he's coming back for No Way Home!

Seeing this figure on the shelf at Target, it may look like a straight re-release of the Homecoming Build-A-Figure, but it's surprisingly not. You pretty much need to stand the two figures next to each other to see what's different, and since nobody seems to have done that, we're going to do it today.

First, the colors, since they're the easiest to spot. The new toy is brighter overall, with a warmer brown jacket, more saturated fur collar, and vibrant pants. 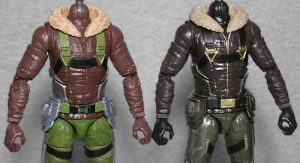 Even the silver of his harness is a lighter shade than before. His gloves are brown now instead of black, and whatever shirt he's wearing under the coat doesn't get painted now - it's the same bare brown plastic seen on the rest of the chest. He doesn't get gold for his zipper, and the straps crossing his chest are now green rather than black - a fairly clumsy attempt to turn the "full multi-point harness" sculpted on this toy into the "armored backpack straps" seen on the movie costume. 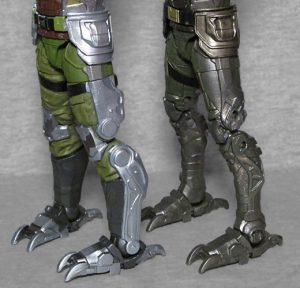 And it's not like they were unafraid of new sculpts. From the waist to the ankles, it's all new work. The old figure had to be based on concept art, and at the time, the concept was Vulture would wear full, specialized boots, not the exterior braces they eventually settled on. So to match that, this release has new legs. And yet they still didn't fix the feet to point outward instead of inward. Why is this simple anatomical fact so difficult for toymakers to get right? Feet don't turn in! For cryin' out loud!

The head is new as well. The helmet is a little smaller,

and the visor over the eyes is removable (for some reason). The top part of the helmet is black, with silver and green around the jawline and only a single air tube running to the back. So we can do all that, but somehow still no unmasked Michael Keaton head? Include likeness rights in your villains' contracts, Sony! 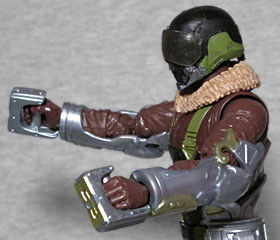 We do get some new accessories, though. While remolding the legs was apparently just fine, I guess redoing the arms was out of the question; so the braces that run on the outside of his arms are new accessories, as are the pads he holds in his hands. What are those for, anyway? We know he can control the suit without them, and it's not like he's punching people all the time, so what's the deal? And on that note, why don't we get the big slicey rifle he used to cut the Staten Island Ferry in half?

The biggest disappointment is the wings. They're identical to the old mold, meaning they've still got all the problems we talked about before. Like the legs, those old wings were based on concept designs, but the movie came out five years ago: we're well past the "concept" stage and very much into the "pause the Blu-ray and look at clear images of it" stage. Yes, we know redoing pieces as large and complex as the wings would have negated the entire point of this release, but it certainly would have made the toy better and more worth getting. The biggest difference between the new and old releases are the turbines: on this one, they're a glowing blue, rather than dull silver. 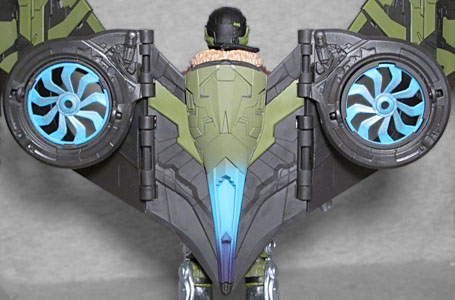 So: no new wings, no tech guns, no Keaton face, only half an improved sculpt; brighter colors, a few new extra pieces, and being able to buy it all at once instead of piecemeal. Is this Homecoming Vulture worth it? Eh, if you already have the BAF, not really. It isn't an upgrade - more of a sidegrade. A lot of other things could have been changed to truly make this a better Vulture figure, but the goal was a repaint that didn't cost much. We're lucky we got as much as we did.