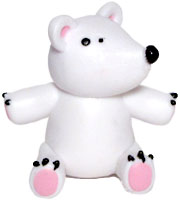 Hey look, it's the figurine we probably should have gotten on Day 7, only five days late! The Elf Advent Calendar had already given us Baby Walrus and Arctic Puffin, but then we took an entire work week off to get a bunch of garbage before getting Polar Bear Cub. He's sitting, with his arms held wide and his legs in front of him. Like the puffin, both his eyes are on one side of his head. His eyes, nose, and claws are black, and the ears and paw pads are pink. While the other animals were all voiced by Jon Favreau, Polar Bear Cub instead got stop-motion pioneer Ray Harryhausen. Pedigree!