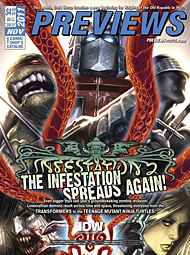 DC Direct has nothing new this month - rather, they're changing the way they solicit their product, now listing things only four months in advance, rather than the "we don't know when these are coming out" months they used to use. So look for new stuff next month.

IDW is having another crossover, Infestation 2 - this time featuring Cthulhu instead of zombies! We've still got GI Joe and Transformers involved, but also the TMNT. Check it out on page 142. And the Transformers will be the Hearts of Steel versions!

The next series of Marvel Minimates is shown on page 348 - this time the entire series is based around "The Death of Jean DeWolff."

Page 352 has a listing for a new set of GI Joe figures - Sci-Fi, Techno-Viper, Law and Order, Airtight, Scarlett, Zombie Viper, Lifeline and Tunnel Rat, plus some rereleases.

Traid Toys has some items listed on page 356 - Artemis will surely be excited!

Marvel Universe is listed on page 357, both comic packs and singles.

NECA's next assortment of Predator 2 toys are on page 358, right about the first Rocky toys.

Pages 359 and 360 are all Playmobil, so Rustin is surely salivating at the prospect of Egyptian and Ghost Pirate themes.

There a big two-page spread of Star Wars listings on 362/3, but it's all text, no pictures.

The Assassin's Creed Brotherhood Ezio figure is available on page 364.

Poe has avowed to collect all the Arkham Asylum toys, so he's probably thrilled to drop $120 on page 379's Play Arts ~Kai~ Batman and Joker.