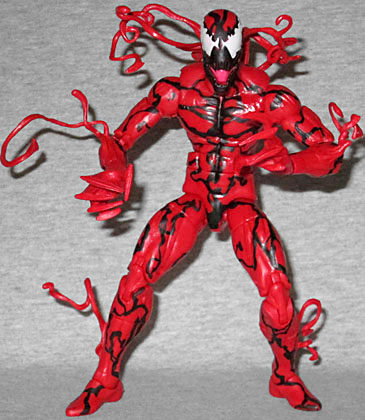 Well, this is super disappointing. This figure is basically the same as the one that came in the Amazing Spider-Man 2 line - you know, the one with the Ultimate Green Goblin BAF. It's so similar, we're even reusing the same photo for this review. The paint masks are the same, the tendrils coming off the body are the same... the existence of this toy makes that old one garbage.

Why? Because of the accessories.

First of all, much like the Venom in this series, Carnage comes with an alternate "civilian" head, showing Cletus Kasady in all his grinning, psychopathic glory. When Kasady first appeared, artist Erik Larsen just needed to give Eddie Brock a random cellmate, so he blatantly drew the Joker and left it to the colorist to make him pink instead of white. This head isn't based on Larsen's art (it's more Mark Bagley, with added sideburns for some reason), but it still means that Hasbro's technically made a DC character.

But that's not all. One of the gimmicks that 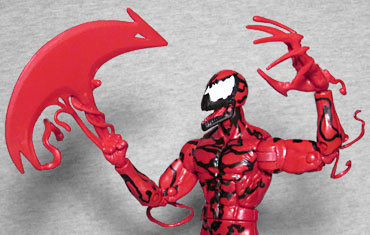 set Carnage apart from its parent, Venom, was the way the symbiote pushed its abilities. Venom would give its wearer creepy fangs and sharp claws, but Carnage turned those claws into foot-long daggers, and would form bladed weapons as well. Like a T-1000. So this figure also includes an alternate left hand with extra-long claws, and an alternate right fist with a massive scythe-style axe flowing off the knuckles.

As a part of the Venom ML series, Carnage comes with a piece for the Monster Venom Build-A-Figure: the head. The ASM2 Carnage also included a BAF piece, and that's where the problem comes in. See, four years ago, Hasbro was still really gung-ho

on their stupid idea for "swap figures," where two toys would share one name and, often, one BAF piece. The "Spawn of Symbiotes" release gave us both Toxin and Carnage, and if you got them both because you wanted the characters, you ended up with duplicate BAF parts. Now we know that there was literally zero advantage to buying Carnage back then, because Toxin covered the Green Goblin BAF, and this release covers everything else. This toy has made me retroactively mad that I bought another one.