Black Widow has been moved back to November, so there's no way we could actually spoil any plot points yet, but let's face it: things don't bode well 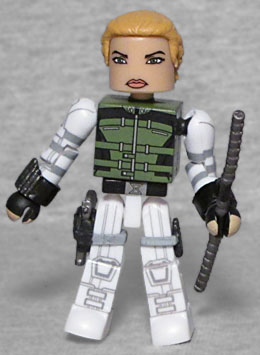 for Yelena. For one thing, she's wearing what appears to be the same green vest Natasha wore in Infinity War, and there needs to be some reason Nat chooses to dye her red hair blonde. So basically, Yelena is either secretly Taskmaster or she's going to die. [Why not both! --ed.]

In the comics, Yelena Belova was a later graduate of Russia's "Red Room," the training program that produced Black Widow, and she'd been taught to hate Natasha for being a traitor. The movie seems to be making them slightly more cooperative. As mentioned, she's seen here wearing a green vest over a white uniform. She has a pistol that fits in the holster on her right leg, while her left leg has... throwing knives, maybe? She has the same bracelets Widow is wearing, and is armed with the conjoined baton staff that's been around for a few years. Her blonde hair is done with a nice braid across the back, like something Princess Leia would wear.

There have been at least half a dozen Red Guardians 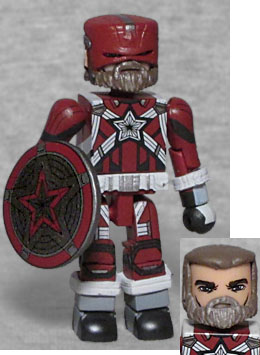 in the comic universe, at least one of whom was Black Widow's ex-husband. The trailers make this one appear to be more like... her dad? In perhaps a non-biological but emotional way?

The costume is a direct adaptation of his comic costume, as much as the various MCU Captain America suits are an adaptation of his: you know, parachute straps over canvas. It's a lovely dark red, with white accents aplenty and an intricate star right in the center of his chest. A fin goes over the top of his head, setting him apart from Steve Rogers (which is more than the included shield has ever done, let us tell you that!). This Red Guardian has seemingly been in prison for a while, explaining the big beard poking out of his mask. Or alternately, if you want to take the mask off, there's an alternate hair-and-beard combo so you're not left with a bald David Harbour.