Today's review of DC Multiverse Red Robin said that all the New 52 Robins have worn their own unique suits. Take a look:

We begin, of course, with Dick Grayson. His look owes a lot to the Neal Adams Robin design, though choosing to replace the red trunks with an arrow pointing at his junk is... certainly a decision. Maybe he wanted to subconsciously hint at his real name? 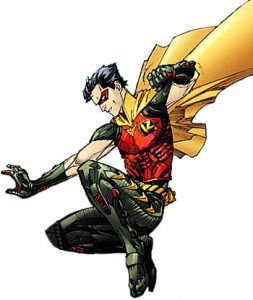 The benefit of designing a flashback costume is that you can use it to reflect the future. For instance, Jason Todd wears a red mask instead of green, presaging his turn as Red Hood. His suit was rougher and more armored than Dick's, but dropped any use of black. 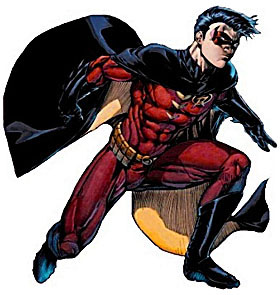 Tim's "first" costume was really his second old costume (the one based on Batman the Animated Series), just minus the black trunks.

Here's some bonus art, too. Such as the New 52 take on Nightwing's post-"disco" blue-and-yellow costume:

And before she was Huntress, Earth-2's Helena Wayne was her father's Robin, wearing a costume of her own: 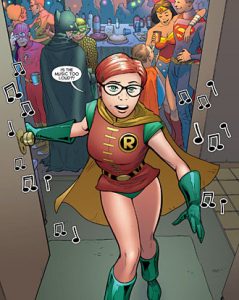 (She was at a costume party. Wearing a replica of a costume that now never existed, it seems.)

This entry was posted in addendums, comics, commentary, DC and tagged Batman. Bookmark the permalink.