The Imaginext Bind Bag series are things I really, really enjoy but I've found them increasingly tough to find over the last several waves series. Fortunately, this sixth series of the DC ones seemed to be a return to ample distribution so I was thrilled when I was able to snag myself a full set in a single go last year!

Overall, this is a pretty solid set, with a decent mix of classic and new characters. I do wish there was at least one more better-known character or costume in this mix though, and ideally a villain. Also, the set feels a little heavy on the warm end of the spectrum and it would have been good to get some green in the color palette on display here. But these quibbles are fairly minor, and the set overall is fun enough that it's the first complete DC series I've picked up since the second one (though I'll concede part of that was finding everyone at once). 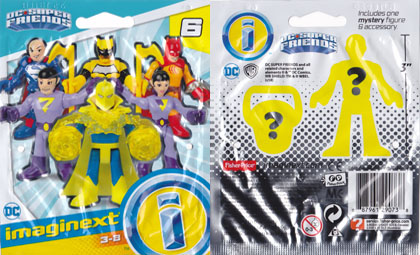 This series' package features a nice grayish blue color theme with bright yellow as the secondary color, featured on the series number and silhouettes on the back of the package. As with all Imaginext Blind Bags, there are code-numbers stamped on the upper left corner of the back package making it much easier to source the characters and figures you want, and those numbers are included below for your convenience. 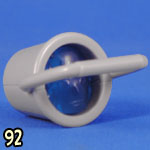 I mean, truly, who ever expected we'd get the Wonder Twins from Imaginext!? And while they seem perfectly primed to be a standard two-pack, I think they do fit the blind bag format fairly well. I'm sure Zan's body is reused from somewhere, but the paint job, and Z-shield, really make this feel fresh and unique. That's no doubt aided by the new head sculpt, which includes the tall collar, and that really completes the look of the costume! He comes with an all-new accessory, too - a gosh darn BUCKET OF WATER!!! The absolute quintessential Zan transformation! The bucket and handle are a solid piece, sadly, so the handle can't swing down or anything. But Mattel didn't just stop there... inside the bucket is an actual sculpt of water! It's appropriately cast in translucent blue and, awesomely, even has a sculpt of Zan's face! So incredible - exceptionally well-played, Team-Imaginext! I love it! 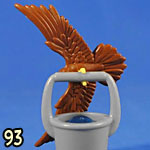 Jayna sports the standard female Imaginext jumpsuit body, but like her brother the paint deco goes a long way to making her feel unique and recreating the costume well. She too gets an all-new head, which also includes the big collar to complete the iconic look. It's a clever bit of design work to save on tooling and also maintain the full functionality of the neck swivel. Jayna comes with a hawk accessory, which is her in animal form. Its feet are a simple clip, which fits over the bicep but weirdly is too small to fit over her wrist for a more realistic perch. I don't think I realized before that these figures basically recreate the infamous SDCC two-pack from 2009... and it never dawned on me until looking back to my photo of that set that Jayna's hawk (eagle?) form is actually meant to clip on to Zan's bucket form! The clip is a little too loose of a fit unfortunately, but maybe it's just stretched out a bit from living on Jayna's bicep for awhile here. Still, though, while the eagle can't stay upright on the bucket there's enough of a grip she can loosely pick up and transport the bucket - and that's pretty rad, guys! 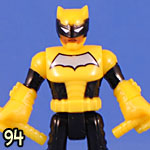 I don't know who or what this is, and had to rely on Google to get the name. I think he's some kind of new Robin, or Batman devotee...? I'll confess, though, that the design is pretty cool looking and wonderfully toyetic - if not, completely illogical for being a Batman, I mean... that much bright yellow is both hyper-noticeable and not at all fear-inducing. But then again, Dick Grayson and Jason Todd didn't wear pants, so... who knows. He comes with two big bat-axe things that look pretty nice. I don't know... it's just a fun Bat variant that makes for an entertaining toy, especially in a kids' line. 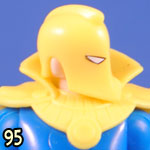 Dr. Fate has been a huge personal favorite (my god, that helmet!!!) since the Super Powers figure so I was super excited to see that they included him here! Somewhat surprisingly they reused Sinestro's body for him, but thanks to a new cape piece on the shoulders it does feel a little bit more distinct. I suppose the benefit of Sinestro's sculpt is the more dynamic angled boot tops and the belt band around the waist, but the angled sculpts on the torso just seem odd - not to mention the fact that he is sporting an (unpainted) ring on his left hand. The sculpt of the cape-top piece is quite nice, though, and takes it's inspiration from a more modern Fate by combining his amulet with a more armor-y collar over the shoulders and under the high collar of his cape. The helmet is a great new sculpt that captures the iconic look quite well. The main section of cape, however, is cloth just like most other caped Imaginext figures. Shockingly, the head is a two-part piece with the helmet glued on and over a beige skintone neck and "head" - so his ears kind of pop out within their cutaways! Such a wonderful and bizarre bit of expense, but it looks good. My only guess is that they were hoping/planning for some vac-metalizing down the road, maybe. He comes with a bizarre new accessory, soft translucent yellow plastic with two giant fists connected by some electricity (I'm guessing). I suppose it's meant to be one of his magical effects... But it's a "the thought is nice" kind of thing, since it ends up looking more like shackles when he's got it on. This figure was by far my most anticipated character in the series so I instantly bought two once I found them... but aggravatingly both have distracting QC issues... One has several drips of yellow paint on the blue parts and the other has minor misprinting on the eyes and big gob of glue on his right breast/pec. Come ON, guys...! 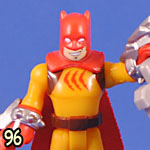 I don't know that I'd ever heard of Catman before the Mattel figure, and he certainly does feel like a bit of a bottom-barrel character and effort... Basically "what if he just looks like Batman? Yeah! But orange and yellow! Sure. And... and give him Wolverine claws, too! Alright..." This figure captures that pretty well, despite a little bit of masking issues with the paint, mainly around the belt. I presume this is just a repaint of any number of Batman figures, but he does get some brand-new tooling is the guise of new hands sporting the "totally not a Wolverine ripoff" (I mean, he's almost wearing Wolverine's colors for crying out loud!) claws. The sculpts are nice and surprisingly more detailed and pointier than I'd expected from Imaginext. He come with a silver briefcase with a dollar sign on it because he's a hashtag-Villain. That, or just a hyper-paranoid hero with the power to not trust banks. 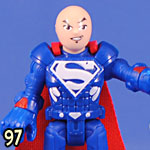 Similar to Catman, I found out about this premise thanks to a Mattel figure, and while it's likewise a sort of low-hanging fruit, campy idea... I gotta admit I dig it. I actually quite liked the 6" figure, but not enough for go for in it as a build-a-figure, so this one is a nice consolation version! The sculpt might be mostly new, but not in the way I expected. I thought the torso was new since it has the sculpted S-shield, but it's actually reused from Steel! It seems like the arms and legs are actually new - that seems surprising, and there is something familiar about the hand sculpts, but I certainly can't source them on another figure at present. Paint is quite minimal, but does a pretty good job of conveying the design, as does Lex's smug smirk. He comes with a big pair of connected handcuff clamps which seems like a really good fit for the character - either for him to use on Superman or Superman to use on Lex! This guy is just a simple, fun little treat and a perfect example of the strengths of both Imaginext and this blind bag series!

This entry was posted in codes, DC, Mattel, Rustin's Spoils of the Week and tagged Batman, Justice League, Superman. Bookmark the permalink.