Remember the Evil Horde's Slime Pit playset? It came with a mini-comic 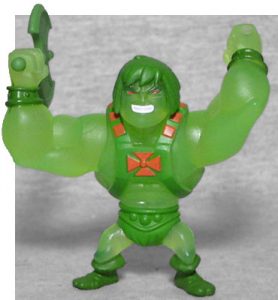 showing the Pit in action: Hordak forced He-Man to get slimed, turning him into an obedient zombie. That was in 1986. Fast forward to Q2 2017, when The Loyal Subjects did an Action Vinyl they specifically called "Slime Pit" He-Man (that September Super7 also released a 2" "Micro Japanese Vinyl" He-Man in translucent green, but they also did other characters in the same style, so it's just a coincidence). And then, like Dreamwave breaking the idea that Ultra Magnus' inner robot could be its own thing, we started getting more Slime Pit He-Mans from other companies - POP!s, ReActions, etc. And also this Eternian Mini in Series 1. 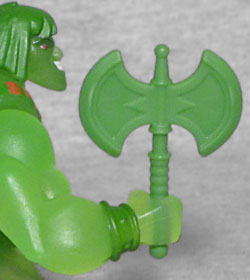 For whatever reason, Mattel doesn't use the "Slime Pit He-Man" name for their versions; rather, he's always "Horde Zombie He-Man." Also, they make him from translucent plastic, apparently confusing "a character covered in goop" for "a character made from goop." This mini is the same mold as the regular release, just, you know, translucent green. With his hair and clothes painted. Is he any rarer than any other Series 1 figure? No telling - I just looked for the pack marked with an H, then didn't need to look any more. Instead of a sword, he comes with an axe. Also painted instead of clearish. 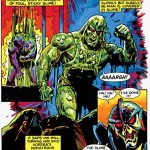 But here's a question for you: if Mattel was already making this figure out of unusual plastic instead of the normal stuff, why not make him glow in the dark? That woulda been a ton cooler! Worked for Scareglow. And would have had just as much to do with the original as translucence does.

Horde Zombie/Slime Trap He-Man was not part of the cancelled MotU Minis, so he's something created specifically for this soft reboot.