Today we reviewed the Hasbro Pulse exclusive Snake-Eyes, and said it's fairly different from the normal release. How different? Read on! 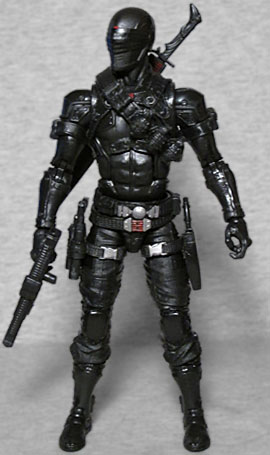 Mass-market Snake-Eyes does not get as many paint apps. To be honest, being a more solid black suits the character better - he looks more "Snake-Eyes"-y when he's not wearing lighter pants. That's not to say the regular release is solid black like he was in 1982; there's a mix of gloss and matte, plus some dark greys, but overall the tone is more consistent.

The weapons are different too. Regular Snake-Eyes doesn't get the alternate hands, his scabbard doesn't have the grey app in the center, and instead of a realistic Uzi and pistol, he gets future tech-guns like the rest of the figures in the line (which is a point against him, because the pretend handgun doesn't really fit into his holster properly). Both guns have holes through them large enough to accommodate the pegs on the backpack and scabbard, and the larger gun has a peg of its own in addition. 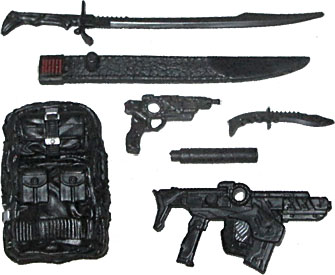 You can use that to hang it off the pistol in the holster, maybe? On both versions of this mold, getting the bandolier lined up with the backpack peg leaves it sitting a little too high and floating away from the chest. You could just push it down and not use its peg hole if it bothers you.

So the exclusive has better accessories, but the normal version has better aesthetics. You probably don't need both of them, unless you're a total weirdo. 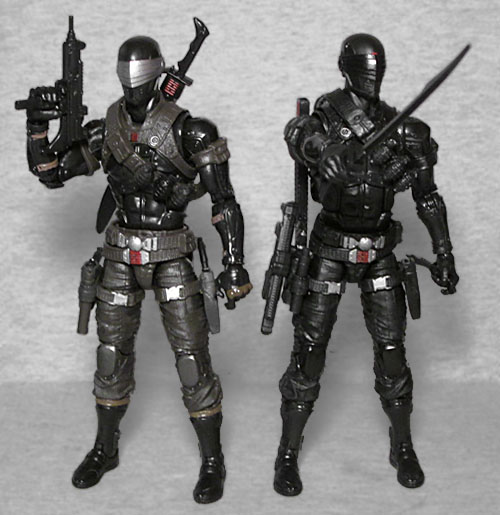 (...now, I wonder how much mixing and matching of parts I'd need to do to create one ultimate figure? Exclusive head, mass body, exclusive forearms and boots, mass backpack, exclusive weapons... it could probably be done... hmm)