"Darling, I'm heading out to the mall to buy some fruit" remains the weirdest sentiment suggested by these Transformers BotBots. It makes sense that the Fresh Squeezes live in a kiosk rather than a real store, at least, but the notion that someone is making their living selling whole pineapples within sight of a Zales or Bath & Body Works is just silly. 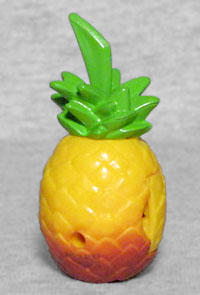 rent one for a party (outright buying one would have cost thousands of dollars in today's money), and they were a common decorative element in printing and sculpture. Since they require tropical climates to grow, cultivation in Europe required hothouses known as "pineries" - but since smoke and fumes from a furnace would kill the plants, the heat was provided by horse manure. Ah, delicious fruit! In most languages it's called an "anana," but the English called it a pineapple because its pointy rind reminded them of pinecones, and "apple" used to be the generic term for any fruit. The skin here is molded with a diamond pattern, and a leafy green crown sticks up on the top. The body is yellow at the top, fading to a darker brown at the bottom - not quite accurate to the real thing, but it gets the idea across.

BotBots are simple to convert: for this one, pull the arms out to the sides, pull down the feet, unfold the panel from the face, and then... remove one of the leaves from the top to be his sword! 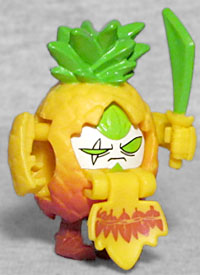 He can smell calories from miles away, and will trim out anything unnatural with a quick flick of his ninja sword.

It's funny Sensei Spiny is the violent one, because pineapples contain bromelain, an enzyme capable of breaking down protein in meat - in other words, when you eat a pineapple, the pineapple is trying to eat you back; it's a race, and you better hope you win. Spiny is not the first BotBot to come with an accessory, or even the first we've reviewed. The blade of the sword is green, while the hilt is yellow. It can be held in either hand. His face is adorable, with a cute little frown, off-sized eyes (with a scar over the right one) and a leafy crest molded on his forehead. The art makes it look like the flap on the front is supposed to be a beard, though you'd likely not guess that without prompting. 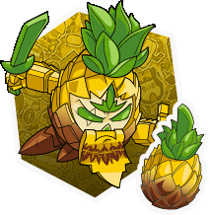 Part of Series 3, Sensei Spiny is available either blindpacked, as #20, or in a Fresh Squeezes 8-pack.