We did a Wreck-Gar addendum after four months, and Thundertron after five; this one's been more than a year! 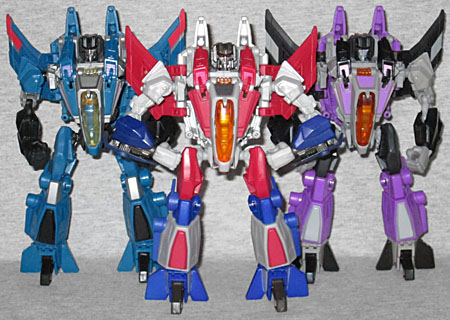 When Hasbro releases a Starscream mold, you can be reasonably assured that his two buddies aren't too far behind. 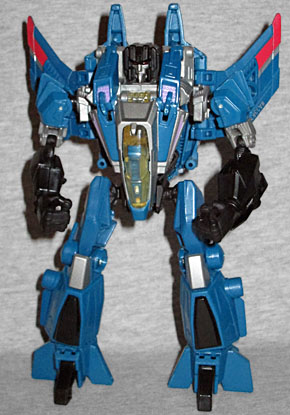 Thundercracker believes that the ability to fly is the ultimate expression of evolution among his kind. He views all those without it as inferior beings, doomed to crawl and struggle in the dust. He proves this to himself over and over by taking every opportunity to attack those below him. But his sneering superiority hides deep insecurity. He's unsure of himself as a warrior, doubts his commitment to the Decepticon cause and suffers an almost crippling fear of someday being trapped on the ground.

Although these figures are based on War for/Fall of Cybertron, they've been reappropriated by IDW as G1 designs. In fact, they're sold as G1 designs - you can easily put them in whichever collection you prefer. 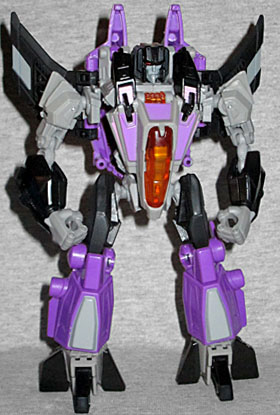 Skywarp could use his teleportation ability to tip any battle in favor of the Decepticons. Too bad his circuits aren't sharp enough to figure out when and where he should use it. Instead of creating an unrivaled tactical advantage, it mostly gets used for harmless pranks. Betcha didn't see that coming.

Naturally, the sculpt of these toys is identical to Starscream's, so the thing that makes them different characters is only the paint. Thundercracker is a nice rich blue, with black arms, red and silver stripes on the wings, and a yellow cockpit. Skywarp's purple is a bit bright for our tastes, and there's a lot more gray on him than you'd expect - only his forearms and thighs are black, rather than the entire limb. That's more black than the Takara release used, but it's still not anywhere close to game-accurate. 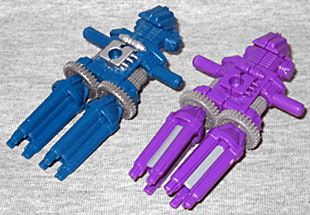 Both Seekers have the same two-piece gun that their leader carried, though with fewer paint apps: Thundercracker's only gets some silver where the two halves join, while Skywarp's has some gray between the gun barrels. The mold is showing its age, though, because when the halves of the gun are put together, Skywarp's guns point in toward each other, rather than aiming straight ahead.

Naturally, both these Decepticons change into jets. Space jets! Shocking the world, Thundercracker's jet is blue, while Skywarp's is black and purple. As with Starscream, the guns can be attached in myriad ways - including beneath the removable tailfin. 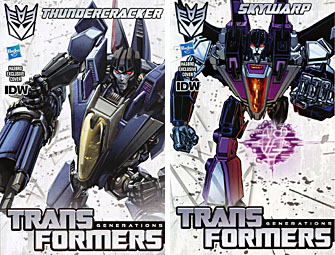 Since both these figures have been released as part of the Generations line, they both include reprint comicbooks. Thundercracker comes with Spotlight: Thundercracker, which includes a reference to the story that came with Orion Pax; Skywarp gets Robots in Disguise #23, the issue that leads into MTMTE #24 (so I guess I should have gotten this figure first). Both issues are written well, but they fall at opposite ends of the current storyarc - from the very beginning, to a much more recent vintage.

If you've got one of these molds, you know what to expect from all of them. I got Starscream because he was a Fall of Cybertron toy, I got Skywarp because he's my favorite, and I got Thundercracker because I knew I'd be annoyed if I got the other two and not him.