For some reason, 2020 seems to be "the year of the geeky advent calendar." The little things you use to count down to Christmas? That're like subscription boxes before subscription boxes were a thing? Yeah, those. Lego's been doing them for a few years, but now Funko, Jakks, Playmobil and more have all gotten in on the day-by-day fun. One of the companies taking part is small indie outfit Boss Fight Studio, who has a calendar based on their Vitruvian HACKS zombies. 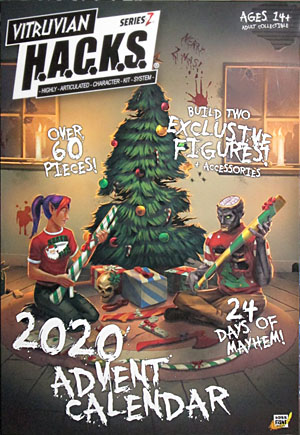 The front of the 10" x 14½" box shows the two "Series Z" figures we'll be able to build, gathered by the tree and exchanging presents in a dirty, ramshackle room with blood (including the message "Merry Z-Mas") splattered on the wall. And yet candles burning in the windows? Won't that attract more zombies to your location? 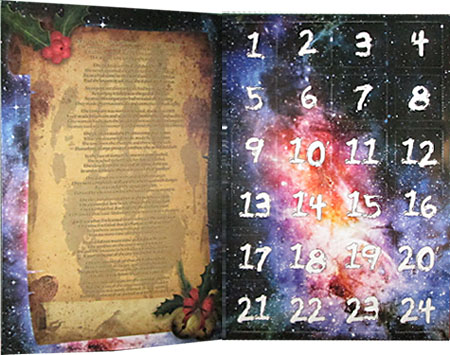 The inside cover features a poem - a Zombie Christmas Poem - and the side with the daily compartments features a cosmological background. Space doesn't really fit with the theme, but whatever. The days go in order rather than being scattered about at random, and the door to each little compartment is perforated on three sides and hinged on the fourth. Without further ado, let's see what's behind Door #1.

Twas the night before Christmas and all through the city/
The zombies were rising; things were not looking pretty.

We start simply: with accessories. Three accessories, in fact. Two books and a lantern. These pieces must come from Series 2 - "Fantasy" - because they're certainly not anything we saw in "Greeks vs. Gorgons."

The books are sculpted to look like they're bound in leather, with metal clasps sealing them shut. The one that's closed has a chain coming off that suggests you'd be able to plug it into someone's waist or something, while the one that's open features a red ribbon bookmark and Christmas-y decorations among the scribbled lines of text on its exposed pages: a Christmas tree, two light snowflakes, and a skull wearing a Santa hat. Cute! The "lantern," upon closer inspection, turns out to be a cage, with a small painted fairy inside. She's got pink skin, yellow hair, blue wings, and a red dress.

Right now, these aren't much; but we've got 23 more days to make them part of an awesome display.